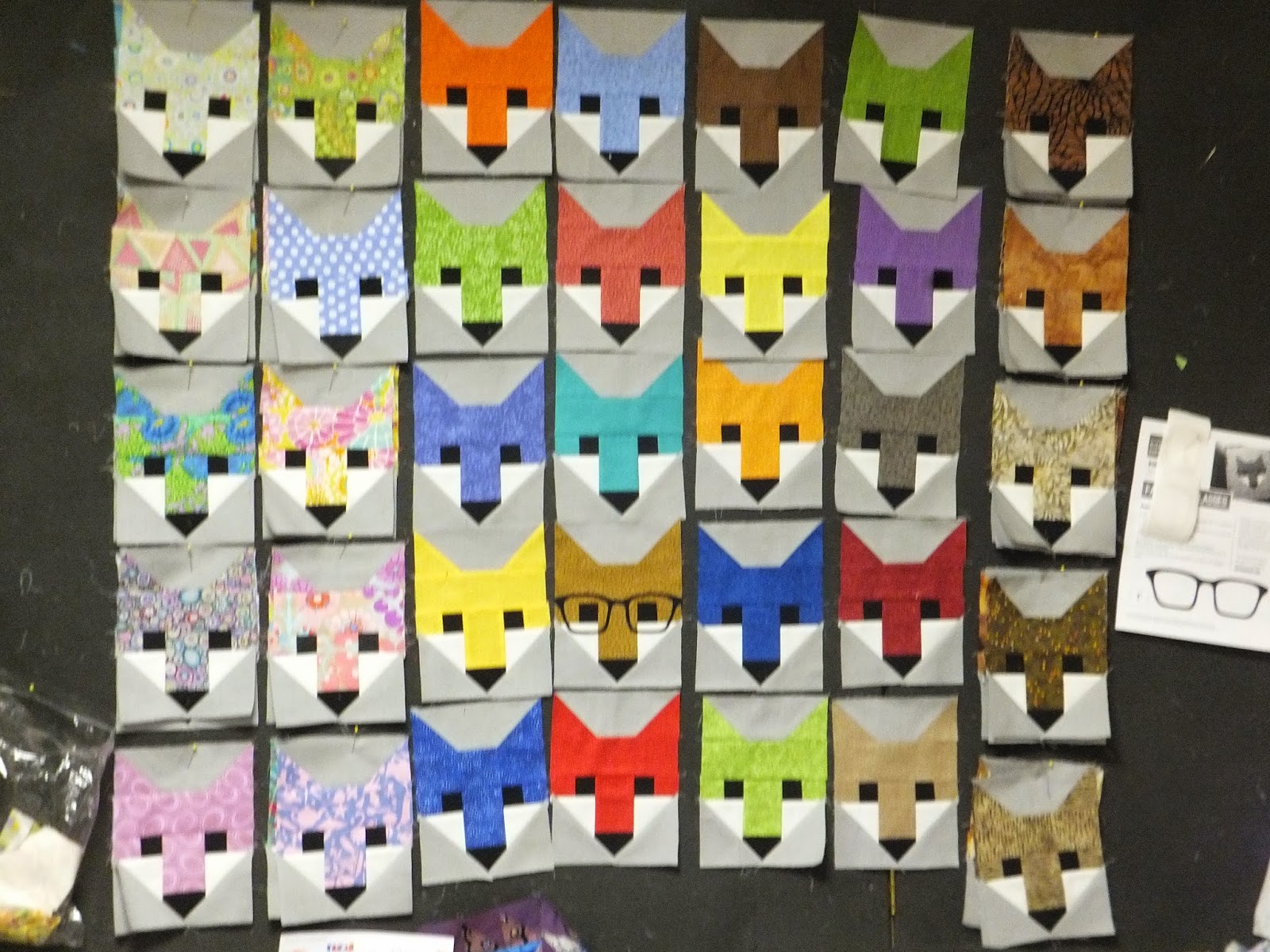 I've been having so much fun making fox blocks. Here are sixty!

On the right are five stacks of four brown-tone batiks for one project.

On the left are ten stacks of two Kaffe fabric foxes for another project.

In between are twenty tone-on-tone foxes, one of whom is nearsighted, for the third project.

Himself tells me that foxes do not travel in gaggles, flocks, packs, or any other unit of multiples; he says they are solitary animals.  I know better but am wise enough to let him live with his delusion.

Amy said…
Love your foxes! And a quick Google search reveals that a group of foxes is referred to as a skulk, leash, or earth. I think your group must be an earth because they look too happy to be a skulk.
Sunday, February 01, 2015 10:09:00 PM

Janet O. said…
You had me smiling the minute I opened your post. What delightful little creatures--and those eyeglasses are such a hoot!
Monday, February 02, 2015 1:42:00 AM

Love you, you Vixen!
Karla
PS: Himself can continue on to be delusional. An earth of foxes is usually composed of family members.
Monday, February 02, 2015 7:23:00 AM

Barbara Anne said…
Love your many fox blocks! That sounds like the beginning of something Dr. Suess would write, doesn't it? Yes, the near-sighted fox is too funny. :)

There was once a children's book that discussed what groups of animals are called, as in a murder of crows. Our sons couldn't get over that nomenclature.

Mrs. Goodneedle said…
The ever-informative and never-to-be-disputed source of all knowledge, Wikipedia, states the following: a group of foxes is referred to as a skulk, leash, or earth. If foxes don't travel in groups why is there a term (or multiple terms) for their groupiness? I'm just wonderin'

Your foxes are the cutest ever... no matter the colorway or fabric designer; they are positively ADORABLE!
Monday, February 02, 2015 10:35:00 AM

Unknown said…
I have it on good authority - okay wikipedia so not that good but the best I could do - that the collective noun for a group of foxes is either a leash or a skulk - think the latter sounds more appropriate - LOVE these blocks especially the bespectacled gentleman
Monday, February 02, 2015 12:50:00 PM

Laura Chaney said…
Lovely foxes! And it looks like there is a flock of words that can be used to describe a group of foxes!
Monday, February 02, 2015 4:44:00 PM