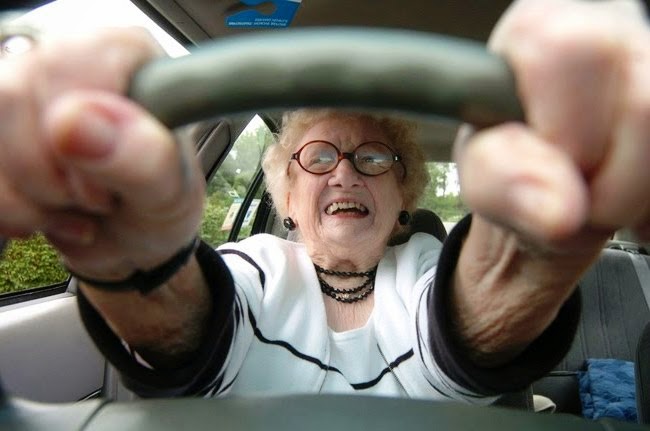 My friend's daughter posted an eloquent plea on Facebook this week. She was recounting the story of her father's accident one year ago, when an elderly woman drove into him in a parking lot. He sustained back damage, a broken rib or two, and a traumatic brain injury. Life for him and for his wife was changed irreversibly. Just like that. The post was imploring people to take car keys away from parents who are too old, too confused, too demented to drive safely.

She wrote of the strain her father's injuries have placed on her mother, and I have seen first-hand what she is talking about. She said that she has begun to investigate senior living communities for her parents.

The post led to a lengthy lunch-time conversation. Joe and I both observed Major Milestone Birthdays within the past month. We both drive. And, Rainman, actually we're very good drivers, and not just on Tuesdays. But someday one or both of us will need to relinquish our car keys. Our neighbor to the left did it on his own after a minor accident where no one was hurt, back when he was only about eighty-four. We admire him for that.

At what point might our son have to approach one of us and say, "You know, Mom [or Dad], I don't think Dad [or Mom] should be driving any more"? When will come the day where our daughter won't post about it on Facebook (because she doesn't have time to post much at all on FB), but will be looking into possible alternate living arrangements for us? What will that be like? Will she know what our preferences might be?

We spoke for a long time about community, continuity, change. Knowing that as good and wonderful as our lives are now, this is not forever. It wasn't an easy or comfortable conversation, nor were any great conclusions reached. We are both aware that it was the first of likely many such conversations, and as strange and perhaps difficult as it was, we are glad that it happened. We'll need to think about initiating these kinds of conversations with our children at some point.

Every single time I work a hospital chaplaincy shift, I am with at least one older couple whose lives have changed irreversibly. Just like that. Not gradually, but all at once. We look at our dear neighbors to the left -- he now well into his nineties and she our age but with failing health -- and wonder how long the status quo will be the status quo. Their son lives in another state, and some months ago they gave me his telephone number. After lunch today I sent my daughter's telephone number to my dear neighbor to the right, hoping she won't need it for a long time or perhaps ever, but it just seemed the sensible thing to do.

Just what I'm thinking about on a frigid, sunny day Near Philadelphia.

Unknown said…
Thought provoking Nancy and not just driving and living accommodation - we should make sure our financial affairs are in order too - not sure what you have in the US but here in the UK it is possible to set up what's called 'a lasting power of attorney' to nominate someone to look after your affairs once you're incapacitated
Sunday, February 15, 2015 2:41:00 PM

Quiltdivajulie said…
The conversations you describe with the younger ones are absolutely necessary - and all too often avoided. Working at the law firm, we saw SO many matters that should never have needed an attorney's involvement IF ONLY the parents had written out their wishes, signed a will, created a trust, or even TALKED with their children. KUDOS to you and Joe!
Sunday, February 15, 2015 8:19:00 PM

LizA. said…
Sigh, we will be facing this with my father soon.. but getting him to acknowledge that he can no longer drive or live alone is not a battle I look forward to having and I know it will be a battle. My siblings just stick their head in the sand and say "but he's happy in his house...." at least he has a caregiver that comes in several times a week.......
Monday, February 16, 2015 10:37:00 PM

Laura Chaney said…
I think as hard as these conversations are, they're so important. I try to check in with my parents (both in mid-sixties) every time I'm home to make sure we're communicating now about important decisions that they might need to make in the coming years. It used to make me upset to think and talk about a time in the future where they won't be there for me, but as I've gotten older I've found peace in knowing that I understand their wishes and that we're talking about everything now. (Obviously not just driving, but assisted living and wishes for after death, too).
Tuesday, February 17, 2015 3:40:00 PM

Mrs. Goodneedle said…
You are one wise woman; thank you for your insight on this matter. This subject hits close to home right now and, because of this, we will have conversations with our own children, it's never too soon to start.
Thursday, February 19, 2015 2:04:00 PM