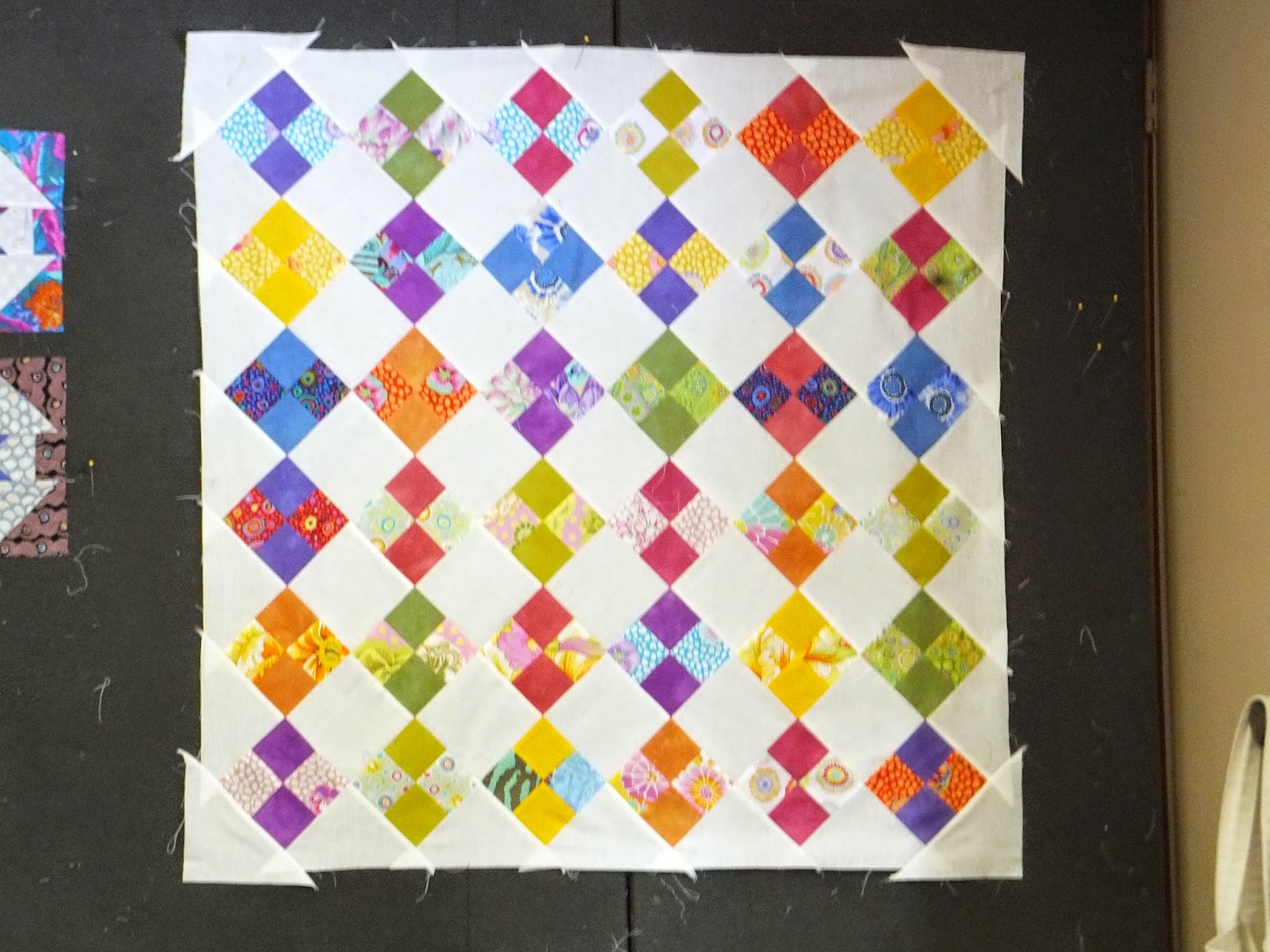 After I finished the "pluses" baby quilt in my last post, I didn't have a real plan for what to do next. The "pluses" had been made from some F8s  of hand-dyes I had picked up at the quilt show back in the autumn. There was just a little bit left over from each of the F8s. I thought I'd go ahead and do something with them right then and there, rather than consign them to the scrap bin.

I have no fewer than 61 Pinterest boards. But I don't pay much attention to them. Mostly they just kind of hang there. Occasionally I choose something from Soup Of The Evening and make it. I've done nothing with the 55 pins on Let Them Eat Cake. "Crock" warrants the occasional perusal and "Organization" doesn't warrant a glance.

In a moment of brilliance that astonished even me, I turned to Pinterest and the board of Baby Quilts to see what might be a possibility for those hand-dye scraps. And behold! A lowly four-patch proved to be the solution! Matched up with Kaffe Collective scraps, I think this has turned out to be a terrific gender-neutral baby quilt. And the blocks went together so quickly. 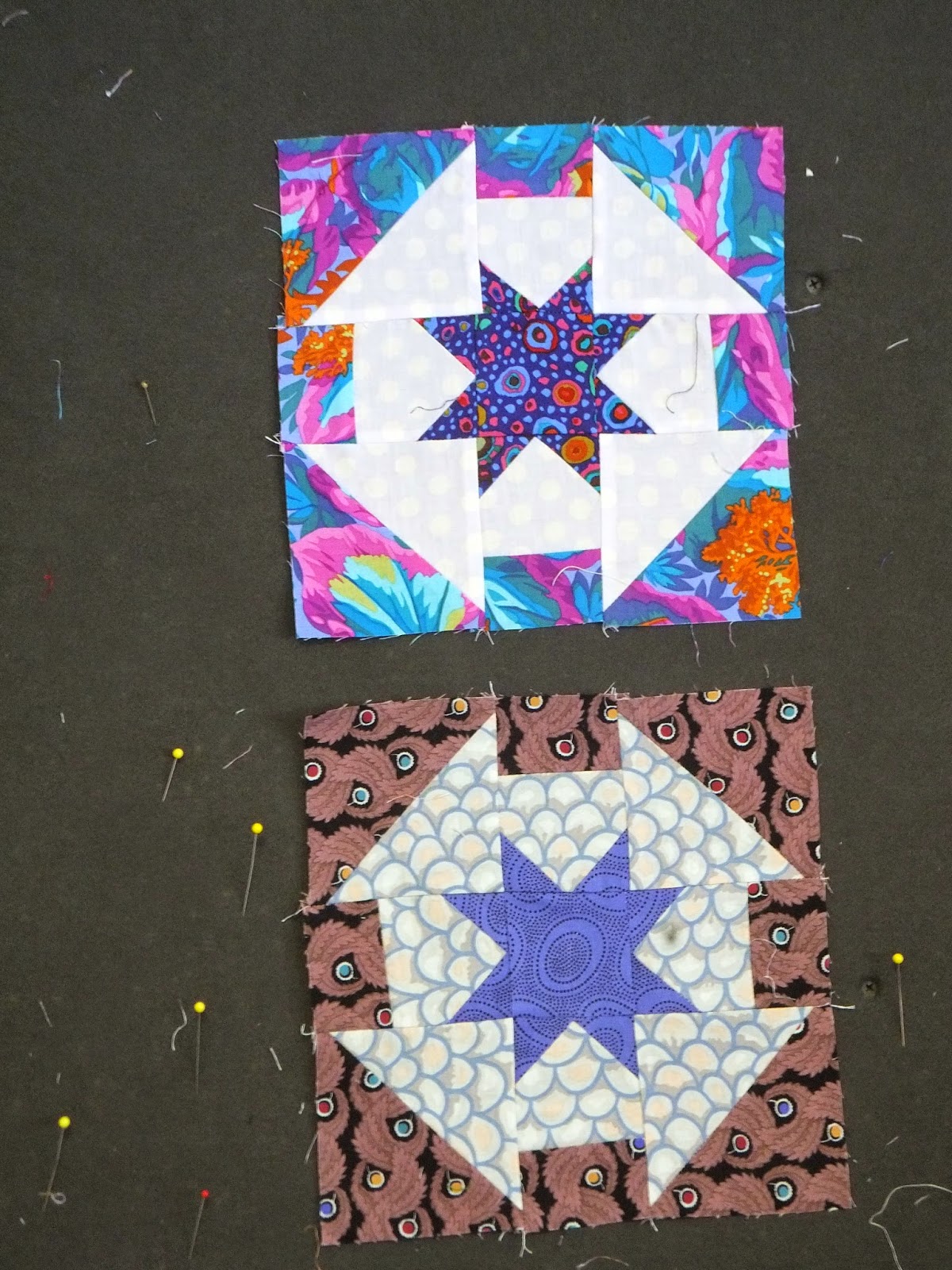 After this great success, I decided I needed a leader-ender project to help me get those 4-patch rows together. I'm on the verge of parting with my Civil War fabrics forever, so I went to the Civil War board to see if there was anything at all there that I should hang onto. And came up with a block someone was referring to as Pie In The Sky. I liked it. I couldn't find a pattern for it (have since learned it comes from a Kim Diehl book called "Simple Graces"), but it didn't look as though it would be all that hard to draft. I was right. (As an aside, the only subject I ever failed in my whole life was high school geometry, so I'm always particularly delighted when something like this works out.) Since I was already deep into my Kaffe-ish odds and ends, I completely by-passed what's left of the Civil War and while putting those little Fours together, made two leader-ender blocks and have a third nearly done.

Quiltdivajulie said…
LOL - I love your thoughts on being math/geometry challenged!

AnnieO said…
I second your enjoyment of these great blocks! Wonderful what inspiration turns up :)
Saturday, February 07, 2015 8:08:00 PM

PatchworkRose said…
Love Pie in the Sky Kaffe Style. I too have a special Kaffe collection along with a treasured Repro Collection of fabrics.
Cheers Lynne
Saturday, February 07, 2015 9:48:00 PM

Barbara Anne said…
Wow! You're really on a roll, girl!!

Love the happy little 4 Patch on point and your two cheery Pie in the Sky blocks.

Well done on drafting that pattern, too. Math was my nemesis while in high school, too. While I seem to do okay choosing quilt block sizes to adapt, I'm always happier to find a pattern sized for what I want to make.