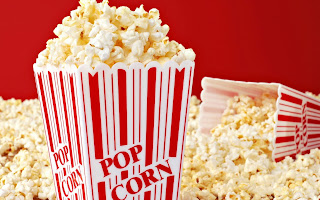 We went to the movies yesterday afternoon and Himself purchased a "large" popcorn for our consumption. It smelled wonderful so we ate some before the film started, and I had one of those oh-olfactory-take-me-back-in-time moments.

For years, Sears Roebuck had a big store in the neighboring town. Close enough to bicycle to. The main thing everyone remembers about that store is that at the ground floor entry, there was a popcorn machine. And the smell of that popcorn was enticing beyond measure. As a kid, I so wanted some, but in our family popcorn was for making at home (putting the oil in the Revereware pot, adding the kernels, covering with the lid, and shaking shaking shaking slowly and steadily over the burner), not for buying at the store.

For a few years, my Aunt Mae worked at that Sears store. This was back in the day, as they say, when  the catalog would arrive in the mail a couple of times each year (and don't get me started on the Christmas Wishbook) and I'd sneak it from its resting pace in our den up to my bedroom and imagine the possibilities. Aunt Mae worked in the catalog department, which meant that if someone in our area called in an order, chances were excellent that my relative would be the one taking that order.

Our nuclear family got along well enough with the other branches, and always had pleasant get-togethers. But they didn't happen often. We were not the kind of family that was in and out of each others' houses, sleeping over, sharing meals regularly.

One summer when we were having one of those infrequent dinners together, my aunt invited me to ride my bike over to Sears one day and she would take me to lunch. I must have been thirteen or fourteen, old enough to have regularly ridden to the orthodontist who was situated very close to Sears. My mother gave permission and the invitation was accepted.

When the day came, I wore my nicest shorts and shirt and pedaled over. I parked my bike outside that ground floor entrance and found my way to the catalog department, where Aunt Mae welcomed me and introduced me to her colleagues, "This is my niece! She's come to have lunch with me!" as though I were someone important. We went out to the nearby Woolworth's lunch counter. Afterwards, we walked back to Sears where Aunt Mae bought me a small bag of that wonderful popcorn to take home in my bike basket.

It was, by today's standards, a very ordinary occurrence: an aunt and niece going to lunch. But this kind of thing didn't happen in my world nearly sixty years ago. It was a most unusual happening and I don't know what prompted it, but she made me feel so special.

Quiltdivajulie said…
I remember a single lunch at my maternal grandmother's house. She had me sit at her small kitchen table (covered with a neatly pressed tablecloth) and served me a tuna fish sandwich on white toast. Almost every other encounter involved my grandparents' standard "children should be seen but not heard" mantra, but that one sunny lunch hour, I felt special.
Wednesday, June 01, 2016 12:30:00 PM

Nann said…
Your own "madeleine moment" (Proust, that is). Remember when Jiffy Pop was the new big thing? Watching the coil of foil expand . . . But popping it in a saucepan is the cheapest way. BTW, what movie did you see?
Wednesday, June 01, 2016 3:26:00 PM

Gypsy Quilter said…
I often remember how any time eating out as a kid was a very BIG deal. Of course, chain restaurants did not exist in those days either. However, I do remember those waffle cones at Woolworth's. Now that was something, 3 kinds of ice cream in between 2 waffles. Ummm. Thanks for sharing the memories.
Wednesday, June 01, 2016 4:21:00 PM

Barbara Anne said…
Lovely memories! I, too, remember the amazing odor of popcorn in the Sears store near us and at McCorey's 5 & 10 (in Memphis) the odor was enticing peanuts. Bliss!

Judi said…
As they say, you never know when you are making a memory, and it's amazing how often it's quite a simple thing that creates a very strong memory.

We recently stayed at a hotel that had a popcorn machine in the bar for guests to help themselves. I have always preferred sweet popcorn, but that salty hit (perfect with drinks) and buttery smell was wonderful. I bought some special butter flavoured popcorn salt to bring home, but I am not sure it will taste the same without a Cosmo!
Thursday, June 02, 2016 9:40:00 AM

Janet O. said…
Loved the stroll down memory lane.
We made our popcorn the same way, and though I have an air popper now, I still prefer to pop our corn in a pot over the stove.
Our Sears store had no popcorn machine (bummer). But three blocks from home was Woolworth. Though none of my local aunts ever took me to lunch there (or anywhere else), I do remember how special I felt when I was Christmas shopping one cold winter day with my Mom and we stopped for a grilled cheese and hot chocolate--wait for it--with whipped cream!! That was a splurge!
Thursday, June 02, 2016 10:12:00 AM

cityquilter grace said…
lovely memories....while i was in maine, the local meat market had a popcorn machine and i always got a bag when i went in....some of the banks have one too....i love it! one summer festival i ran a popcorn stand for a charity and the weather was awful...rainy...but i'd make that popcorn and the smell would bring everyone over for a bag of hot fresh popcorn....an olfactory pied piper!
Friday, June 03, 2016 4:48:00 PM

Tanya said…
I have such a love of popcorn, though my memories are of popping popcorn in a screen like contraption held over a fire in a fireplace! My hubby and I ALWAYS but the biggest pot of popcorn at the movie theater and share it..
Sunday, June 12, 2016 10:59:00 PM