Near Philadelphia is Changing 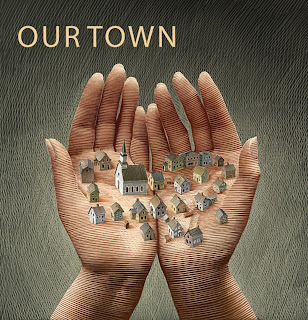 No, our town isn't quite Grover's Corners, but you don't have to look far to find George and Emily more than once. It's a classic small town, the kind of place where the moms tell their kids, "Now remember, if you do something you shouldn't, I'll find out."

Growing up, the movie theatre had Saturday matinees for twenty-five cents; these included not just the feature film but usually a cartoon and newsreel. There was a dime store in the block next to the elementary school and also in that general vicinity two drug stores that featured soda fountains (chocolate coke for ten cents, oh my!). The flower shop is a landmark, having been there at least as long as anyone now living can remember. The grocery store is a place where more than once I was "trusted" for a day if I ran short a dollar or two. It's a wonderful place. A classic small town, as I said.

My parents sold their row home in Philadelphia in 1950 and moved here. I lived in the house they bought until I married in 1967 and moved far away. My husband (from another town) always had "return to Near Philadelphia" as a goal, and after thirteen years in the south and midwest, we achieved that goal, living in our first house for twenty-nine years and our present one for seventeen.

Near Philadelphia's July Fourth celebration is legendary, featuring morning activities, parade (count those fire engines!) and outstanding fireworks. Our kids all had their first jobs with local merchants. They walked to and from elementary school. Small, locally owned shops in the village area came and went from time to time, but there was seldom a vacancy. We walked to the bank, to the grocer, to the pharmacy. If we needed to buy more than a bag of groceries or the weather was bad, we'd drive over and park in the big, free lot behind the theatre.

And now change has come to Near Philadelphia. It's a first-ring suburb and on the other side is a large, attractive mall, luring people from the city. For a while, people were worried that the town would change, would be subject to whatever the opposite of gentrification might be. But that didn't happen and now our problem is quite the opposite.

It seems a couple of newcomers got the idea to make our town a "destination." An upscale shop opened (I went in one time and was put off by decadent, expensive dog beds and Christmas tree ornaments priced at forty dollars apiece). A supper club with live entertainment is scheduled to open soon. An investor purchased the huge block of shops and began rehabbing the apartments above to make them luxurious. The parking lot was resurfaced and a cash-or-credit kiosk installed.

And that's the problem.

Because that lot has been free to all comers since time began. When there's a show at the theatre it fills up and cars need to park in the neighborhood. And during the day, it's where one would park if she needed a half-yard of Kona Ash, a week's grocery order, a mani-pedi, or any one of countless other errands.

People don't think they should have to pay to use the lot when patronizing the local merchants, many of whom are the tenants of this new owner. They don't think they should have to come up with a couple more quarters when  they want to get a birthday card. Or pick up an order of dumplings for tonight's dinner. Or a cupcake for a special occasion. We don't think we should use our debit card for fifty cents if we are stopping at the new soda fountain for a treat.

One of the shop owners told me personally that since the charge for the parking lot began business has fallen off. There are some meters on the street and many people -- myself included -- would rather the township get my quarter than this new lot owner. The more stubborn of us are willing to park a couple of blocks away and walk to the nail salon or the windows-and-doors place. There are a handful of free spaces for users of the bank and another half dozen or so for quick trips into the grocery store. But other than that, everyone has to pay to use the lot, no matter what time or for how long. Sheesh, even the meters don't cost anything at certain times.

Last week the word went out on the quilters' grapevine that the fabric store is closing this month. Someone said that the greeting card shop has also sounded the death knell. I wonder who will be next.

Nothing stays the same. I know that. But I'm blaming that investor and his glorious parking lot for the loss of a couple of fine shops that have been around much longer than he has.

rappy said…
You could probably also blame the town for granting the owner a business license. Perhaps if they hear from enough people and merchants, they'll reconsider?
Tuesday, May 10, 2016 6:12:00 AM

altar ego said…
Your accounting of what's happening Near Philadelphia echoes what happened in the town where I grew up. The fabric store and greeting card store are both gone, unable to afford the rents that went up. Trendy restaurants appeared, along with trendy shops, and parking lots became parking rents. The equivalent of the mall replaced local businesses, and Whole Foods opened across the street. It breaks my heart for my hometown, and for Near Philadelphia. There doesn't seem to be any recourse--the damage is done. I feel for you and your community.
Tuesday, May 10, 2016 7:50:00 AM

Quiltdivajulie said…
It has happened near here, too - and not very far away. One LQS has closed, one is precarious, and the third seems to be solid for the time being (although there is massive change in the complex where she is housed, including a new parking lot and a Krispy Kreme donuts where the old Pizza Hut was torn down). So sorry for the loss of your quilt shop and the others.
Tuesday, May 10, 2016 9:05:00 AM

linda said…
There is a whole other way to think of this: I have no problem paying a couple quarters for a parking spot in a well-lit maintained lot - the prior maintenance was payed for via the rents those business owners paid. Perhaps more people will make better health and environmental choices by walking or biking! I recently listened to a show on NPR about the costs of supplying drivers with free spots. There's no reason for non drivers to pay via taxes, increase costs of products so that drivers have a free spot - especially when living in a place where you can use public transportation, bike or walk. I don't expect you to pay for my bus fare!
Tuesday, May 10, 2016 9:15:00 AM

linda said…
This is not the culprit of a quilt shop closing - that can readily be explained by online purchases - a storefront is expensive to maintain so prices are a bit higher and quilters are unwilling to pay for the shop experience. Bloggers often make the problem worse - they are highly motivated to advertise and frequently plug online stores since they are receiving money from them via sponsorship. Its a sad state of affairs that no one seems to care to fight.
Tuesday, May 10, 2016 9:22:00 AM

howdidIgethere said…
I suspect that it's not a case of either/or. I suspect that the shop rents are also going up with the owner getting paid on both ends, so the shops will continue to be squeezed financially. The paid parking may have simply been the "last straw" for the quilt shop, as it has struggled for some time, I believe. However, it is discouraging for those who have been steady patrons of these local businesses to see the neighborhood change from "Grovers Corners" to "Destination Place" through the demise of the long-standing stores. Places like the "supper club" are IMO not for the residents of the area but for those visiting for an evening. I expect locals are wondering what will be the next business to go under.

BTW, Nancy has never plugged an online store and has never received money for any of the very few quilting "products" she has written about. To post comments like "bloggers ... make the problem worse" on her blog is accusatory and rude.
Tuesday, May 10, 2016 12:06:00 PM

Janet O. said…
Kind of leaves a pit in my stomach when these changes happen. I grew up in a small town that is no longer so small. When I left home for college the outskirts of town were 2 miles from my home (I lived near the town center). When I returned 2 years later to attend the local university the edges of town had sprawled and we had a mall and strip malls. It has never stopped. Many of the small towns in our valley have grown into one and chain stores have replaced many of the smaller Mom and Pop stores. Downtown businesses (mostly local shops) have had a hard time competing with the "new business district" on the outskirts of town and many downtown stores have had multiple businesses come and go in a relatively short period of time. A favorite quilt shop was one of the casualties. It is hard to witness.
Tuesday, May 10, 2016 11:17:00 PM

linda said…
So sorry that you took offense - its a shame you missed my whole point. Please talk with business owners and you will discover that I am right. I only hoped that instead of blaming parking spots Nancy would take up this big issue and speak about the real problem.
Tuesday, May 10, 2016 11:39:00 PM