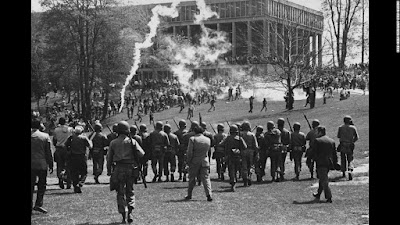 It has been forty-six years but I remember as if it were last week.

We were living in Virginia; Joe was more than halfway through his four-year break from college, thanks to the Vietnam War. We were just a year and a half away from our return to Kent State. We were -- literally -- counting the days

It's been forty-six years, and we don't hear so much about the Kent State tragedy any more. May the Fourth has turned into a celebration of Star Wars movies.

That makes me sad.

But a lot makes me sad lately. Today I read hateful, racist comments about the President's daughter who will be pursuing her education at Harvard. Today a horrible man running for President insinuated that his chief opponent's father had been involved in the Kennedy assassination. And as of today, it seems, a misogynistic, egotistical, racist boor of reality television fame will be the Republican nominee for President.

It is another horrible May 4. Very sad indeed, but -- incredibly -- not as sad as 1970 when the lives of Allison Krause, Jeffrey Miller, William Schroeder and Sandy Scheuer were senselessly taken.

It has been forty-six years but I will never forget what May 4 is about. And it's not about Star Wars.

suz said…
I can't believe it's been 44 years. I was just finishing college in Boston at the time. There were anti-war demonstrations at just about all the colleges and throughout the city. We started to just take them as every day occurrences...and then this happened. It is terribly sad that we don't remember this and that the media doesn't even remark on it.
Wednesday, May 04, 2016 7:08:00 AM

Barbara Anne said…
I'm with you. I clearly remember the horror of the Kent State tragedy and the four lives that were senselessly taken.

quilt for fun said…
I wish we could say that we have learned during those 44 years, but senseless, tragic violence is still around us. Thanks for commemorating the Kent State killings.
Wednesday, May 04, 2016 8:24:00 AM

Annemiek said…
On the 4th of May we commemorate all the lives that were lost during WW2. Nationwide we remember and honour with a minute of silence at 20.00 . it s an official event here in the Netherlands and there are speeches, flowers, the King and government members are present in Amsterdam etc.
Lately it is not just about WW2 but about all that died during conflict/ war. Tomorrow on the 5th we celebrate that we were liberated from Hitler s army by US/Canadian and British soldiers. We celebrate our freedom.
This year I will take a moment to remember those you wrote about.
May we never forget that violence will take us nowhere

Mrs. Goodneedle said…
I remember Kent State vividly too, sadness permeates through all the senseless and tragic events you mention, as well as many more. I have taken to dedicated prayer time for my spirit and classical music has replaced the news at Chez Goodneedle for now... it does wonders for the soul.
Thursday, May 05, 2016 11:10:00 AM

LoieJ said…
Thanks for remembering. I was in college. Though we didn't easily hear regular news in those days, we learned about this and I hit close to home. If this posts 2x, sorry. Fat fingers on fone.
Friday, May 06, 2016 10:48:00 AM