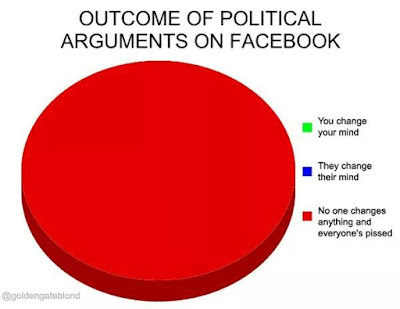 Well, I certainly did not suspect that Politico.com follows the Revised Common Lectionary. But . . .

This past Sunday pastors here, there and everywhere including an old friend preaching at my church cringed as they were given this Gospel to share:

For those who may not know, the word Gospel means good news.

And this morning, a click-bait on Politico's Facebook page proclaimed:

"Trump and Clinton wreck Facebook friendships -- The social network has become the vehicle for 2016 vitriol, and is ruining relationships in the process."

I went ahead and read the article; a great deal of it made sense. And connected with Sunday's lesson from Luke (Chapter 12, in case you were wondering). This is happening to people I actually know. A father and his son argue their political positions on Facebook for all the world to see, getting more insulting with each comment. People have announced which candidate they are supporting and freely invite those on the other side to unfriend them. I've watched a long-standing friendship unravel and probably come to a permanent end over our current candidates.

I think, though, they've got the headline wrong. At the risk of sounding like a member of the "guns don't kill people; people kill people" faction, I don't think Donald and Hillary are actually wrecking Facebook friendships; it's the people writing about them, arguing about them, having to have the last word, those are the people who are wrecking their own friendships.

Two weeks ago, in celebration of the Rio 2016, I made a vow that during the Olympics I would neither post politics on FB nor would I comment on others' political postings for the duration of the games. One of the best decisions I've made in recent months!!! Most of the time, I've just scrolled past those posts, moving on to Karen's inspirational quotes, to Emily's bicycle ride to fight MS, to Julie's celebration of a new grand baby, to Bonnie's newest adventures in the kindness community. I'm a better person for making that pledge. So I'm going to extend it. I'm done posting my political viewpoint on Facebook; everyone knows who I support anyway. I'm done commenting on anyone else's political posts. If someone becomes too rabid, I'm simply going to downgrade him/her to "acquaintance" and unfollow. That way she/he won't see my posts and I won't see theirs. All of this can be revisited and readjusted after November.

Oh, and getting back to Luke: One of my seminary professors has become infamous famous for allegedly shouting, "Preach the damn Gospel!" That's what my friend did.  And she did it without mentioning either candidate.

Quiltdivajulie said…
Another good solid post - however, I have not to date posted political anything on my FB page and will continue NOT to do so. Thanks for including me in your list of positive alternatives!
Friday, August 19, 2016 2:21:00 PM

Vivian said…
So true about social media: it's not (always) the content but, the intent in posting that hurts relationships. When a relative passed away earlier this year, there were a lot of comments posted by family members --- things not said (or that wouldn't have been said) or shared in person that were clearly meant to malign others, even when stated as "an opinion" and not directed to anyone specific. Left a lot of bad feelings stirring around at an already difficult time. Not every sentiment in print qualifies as "communicating".
Friday, August 19, 2016 7:11:00 PM

Synthia said…
Politics in our country has become embarrassing to me. I certainly don't want to talk about it or listen to it anymore. All I can do is vote as best I can when the time comes.
Saturday, August 20, 2016 9:42:00 AM

stitchinpenny said…
Our priest did much the same, but called for us to follow the Gospel, not the politics and even though it would cause for differences and difficulties, be true to God not to yourself or outside forces. The gentle shake to wake us up and make us realize that we need to do what we can and live not for this world, but for the next. Unfortunately I still get angry when reading facebook. I have told my friends that I will not side with anyone on face book.

Carol- Beads and Birds said…
Oh Yay. I saw that same graph on FB. My husband wants to add his 2 cents to every post his brother posts celebrating the Trump nomination. He hands me his phone and says "type.....". I hand it back to him and say I am NOT going to contribute to that. He always wants me to type because I compose thoughts so much better than he can.

I try not to post on my blog what my political thoughts are...I learned my lesson and it only took once. Now if others post theirs and it does not agree with mine I simply pass by. We remain friends. I love my blog world...I dislike my FB world.
xx, Carol
Saturday, August 20, 2016 5:26:00 PM

suz said…
Periodically I post a request that people not post negative political stuff...waste of time I realize, but I feel better. After that I just go past it.
Monday, August 22, 2016 11:27:00 AM