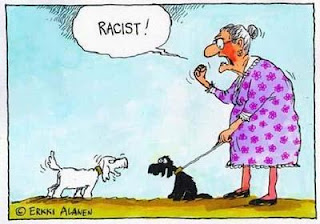 This morning's New York Times Magazine  opens with an excellent article, "Bias Charge". The author poses a question that I'd never considered, never would have known to ask:

"How did racism become an issue of character -- and not culture -- in the first place?"

That part of the paper was delivered on Saturday, so I've had a lot of time to think about it.

My mother was a racist. As a child, I didn't know the word or really understand the concept. But I know that my mother used words that sounded ugly to refer to people whose skins were different colors than our white ones. When I mentioned this to my sister, she replied, "Back then everyone was." It was part of the culture, a culture that began a long, slow, as-yet incomplete process of change.

We've evolved in our tolerance, acceptance, protection, support of other races. Some of us have learned about "white privilege," something that despite my thirteen years in a Quaker school, I barely grasp. Oh, I understand the principle okay, but the nuances elude me. I'm working on this.

But getting back to the question -- How did racism become an issue of character and not culture? -- I don't have an answer, though I know the premise to be true. The question has helped me to get a handle on an on-going situation. There's a woman, a few years older than I am, who lives in a very rural area of a very southern state. "Edna" is a racist. (She's also xenophobic and homophobic, which comes as no surprise.)  I can't do anything about any of this (other than forbid her to use certain words when she is in my home)  and -- for very personal reasons -- I am unable to sever our connection.  Her younger, enlightened brother says, "Oh, she graduated high school in 1956 and got stuck there." He's given up, too, but loves her because she's his sister.

Apart from her racism and related characteristics, she's a person like all of us who has her good traits and her bad ones. But because of that racism, I've had trouble thinking about those things. For me, it's been as if racism is all that she is.

Today, for the first time, I am beginning to understand there is a difference between racism that is an issue of culture and racism that is an issue of character. A difference between people like my mother and others of her generation where no one challenged the belief that white people were better than other people, and Edna who lives about an hour from the nearest traffic light amid neighbors who use the same derogatory racial terms that she uses vs. the people who disrespect our current President because of his skin color and write such vile comments about his daughters that even Fox News had to delete them, and judges who impose vastly varied sentences on individuals that seem, somehow, to be connected to their ethnicity. Racism of culture/racism of character.

The New York Times Magazine article written by Greg Howard is very, very rich. I'll keep it and read it again. It has given me new insight and understanding of my mother, long gone, and Edna, still a part of my life, victims -- if you will -- of their culture. Please read the article if you have the opportunity. If you don't, I'll leave you a quote to chew on:

"It's common for white Americans to position themselves as the neutral arbiters of what is and is not racist and what other Americans are allowed to be angered by. Lo and behold, the answer is always the same -- real institutional racism always ends up being something from the past, something dealt with, not an ongoing system of policies that afflicts minorities and profits white people to this day. Offer any objections, any other experience of the world, and the response you'll get is . . . 'Just [expletive] get over it.'"

OT Quilter said…
Yes, a thought-provoking read. An interesting companion to that essay is the front page article in today's Times, "Segregation, the Neighbor That Won't Leave." I have been thinking a lot about racial and cultural differences and how to bridge the gap between ANY "us" and "them," and indeed, if that is even possible. Have you read
Ta Nehisi Coates "Between the World and Me?" Powerful. (I listened to the audiobook read by the author.) Big questions, especially in a world where so many minds are closed.
Sunday, August 21, 2016 1:03:00 PM

stitchinpenny said…
My question is how do we fix it? Twice this week I have read articles that mentioned that people from the hood as stated in one article or from welfare background as stated in the other having a right to steal. The reason given in one case was that without stealing a teenager wouldn't have clothes to go to school. The other stated that he had to steal since white people don't give us enough. These people are extremes but what can I do to improve that concept in the extremes. There have been too many tirades against BLM to even discuss again extremes but how do we reach the point that there isn't a concept of being owed and a resentment over that concept. What plan will fix it? The welfare state we are in inflames racial and class bias and no one is happy. 50 years of help hasn't and is increasing the divide. I fear we have built walls, but what is my part in tearing them down. There was also a big uproar about a POC college student who wanted only a POC roommate. How do I stop those attitudes from growing in my world?
Sunday, August 21, 2016 8:07:00 PM

Carol- Beads and Birds said…
An interesting article. I wish I could discuss my thoughts on this with you, because I sure can't discuss it with anyone in my family. I was born on Chicago's south side. You hear a lot about that side of Chicago right now and every bit is true. Even though I no longer live there (2 hours away) I still have strong ties there and still dearly love the city. I saw my own racism soften in the past 8 years and have come to highly admire our present President. I definitely believe that racism is cultural and hard to overcome. You must have an open mind and be open to change and have tolerance. I thought the USA was softening...then along came Trump and really stirred the pot. People that hid in their own circles became vocal to the world. I feel like I'm back in the 70s when David Duke was making a name for himself.

I get a lot of phone calls by political pollers. I welcome them and am glad to give my opinion, except when they ask "Do you think our country is headed in the right direction?" How the heck to do answer that? My first thought is about racism and I want to say no. But do they mean economically? Isolationism? I want to say more than yes or no.
xx, Carol
Monday, August 22, 2016 7:15:00 AM

cityquilter grace said…
i never thought of myself as racist even tho i grew up in the 1950s culture...back then our world was small...lived in a small town rural maine, everyone else looked like me. then we moved to a large city suburb with diversity in our neighborhood. later married and lived in a small city with lots of diversity and circle of friends who mirrored that. always able to see good and bad in everyone regardless of race...but deep down still some 50s mores that had to be expunged...was i successful? mostly...it WAS the norm in a different time but it can be relearned by anyone if they desire...there is still good and bad in everyone...
Monday, August 22, 2016 7:39:00 AM

Janet O. said…
This post has caused a great deal of pondering.
Attitudes and biases about race being based on culture or character had not occurred to me before. My community is much more diverse than it was when I was a child--though still primarily white. I have never considered myself racist and have friends from many different races and cultures, but I realize I am not as free of bias as I may have imagined. Thanks for expanding my vision.
Monday, August 22, 2016 10:37:00 AM

I grew up in a southern city where cotton was king and the separation of races was a given. I knew our neighbor across the street employed charming Hattie as their maid and my grandmother employed dearly beloved Alice. My grandmother once told me that in the south, people hated the race and loved the individuals and in the north,people loved the race and hated the individuals. At that time in the late 1950s, it seemed to make sense to me. I certainly loved Hattie and Alice. Since then, I have worked with wonderful people of many races each, like me, with good and less good qualities. I, too, respect and admire this president and his family.

My childhood perspective was that I was kind of tan and not "white" at all. What was the fuss about? I didn't even match the "Flesh" colored Crayon.

It was when I was in my late 30s that it hit me like a bolt from the blue when I remembered my Jewish friends in elementary school having to sing Christmas songs in the Christmas programs. How culturally arrogant and insensitive was that? I cringed. My mother, now long gone, never understood the problem.

When DH was in seminary and our sons were small, we lived in the "Gospel Ghetto" with amazing people from all over the planet. As a result of the friends they made in those 5 years, our sons are color-blind as regards race and they are better men for it.

The American Field Service, who (in the late 1960s) arranged for foreign exchange students to come to the USA for a school year and for chosen American students to go overseas, had a memorable motto:
"Walk together, talk together, ye peoples of the world. Then, and only then will there be peace."

We need to get to know each other.

LoieJ said…
Both of my parents grew up racially segregated before moving to a big city about 1950. So they were racist, culturally. But dad was known to spew hateful things. Mom didn't have a hateful bone in her body. But she fully accepted that people didn't mix much. If fact, we lived just two blocks from an area where blacks were "allowed" to live, so our schools were at least slightly mixed. I think that racism is a character issue when somebody has had a chance to meet and work with people, but that person still groups people by group first, in spite if other evidence. For example, spouting off about welfare when in fact more whites are on programs.
Wednesday, August 24, 2016 6:49:00 PM

Old sew n sew said…
Loved your post as well as all the comments. I came to realize I have been reading too many quilting blogs and it was refreshing to be given something to think about. I especially liked the comment about having some responsibility to tear down the walls, and wondering what exactly I could and should do in this regard. I don't have any answers.
Thursday, August 25, 2016 4:56:00 PM