When Ya Gotta Go 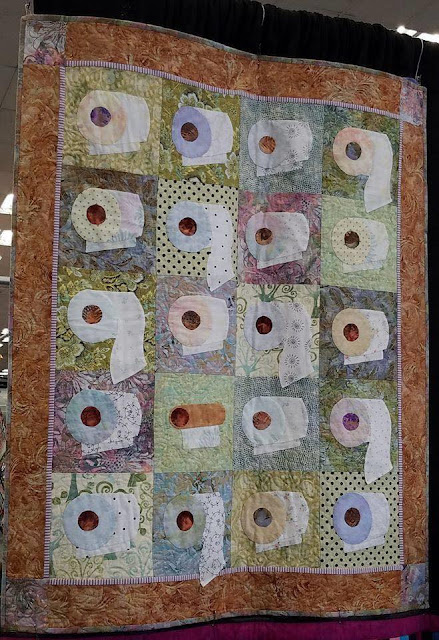 I did not make this quilt. More than two friends have felt the need to post this picture on my Facebook wall.

I did not make this quilt. But, oh, how I appreciate it!

When all of this Shelter In Place business began, I would read how people were hoarding -- of all things -- toilet paper! I reviewed the list of symptoms: scratchy or sore throat, fever, body aches, cough . . . .  Nothing about diarrhea. Nothing about polyuria. What the heck was going on?

As the days and weeks passed (you should pardon the expression), the neighborhood news publications were full of queries about just which stores were most likely to have toilet paper, which ones were out, which ones were rationing. I was fascinated and I was amused. Meanwhile, in our household, we were eliminating our body waste with more or less the same regularity as before.

On our first run to the local grocery store, I picked up a four-pack. "Don't we have some at home?" inquired Himself. "Well, yes, but . . . ." He indulged me. And we added those four to the four at home.

After that, we split up the shopping responsibility. He would go do most of the grocery buying at the small, family-owned store we both prefer. I would go to the big chain market where the produce was better.

And on every list that I made, either for me or for him, I added "toilet paper."  We still had/have plenty, but it seems I have bought into the paranoia.

Himself isn't big on paranoia. He attempted rationality: "How many rolls do we go through in a week?" I felt threatened. Some rolls have far fewer squares than others. "Oh, perhaps three," I told him. "But . . . ."

Dr. Fauci has yet to mention urinary frequency or diarrhea as a new symptom. I know we have plenty of TP on hand (actually, in the linen closet). But . . . .

So he's indulged me, for both of our sakes. When he goes -- to the store, that is -- if the paper goods aisle is stocked (which it isn't always), he'll bring home a four-pack -- just one -- and we add it to the stash.

We're all coping in our own ways. Most of the time, I'm handling things really well. I keep busy. I sew. I play Scrabble. I read. I even clean. I'm fine. Really, I am.

This morning I had to go fetch lettuce and green beans and broccoli and stuff. Following the arrows newly superimposed on the floor of the store, I made my way past Aisle Ten but glanced down there anyway. And . . . . it looked like . . . . the shelves weren't empty! I abandoned my cart and -- being sure to keep six feet between me and the other shopper -- I scored a twelve-roll pack! My finest find yet!

They've been added to the other thirteen in the linen closet. I'm breathing more easily. For the moment.

Maybe I need to make this quilt. But I'm afraid that specimen in Column B, Row 4, would give me palpitations. I dunno.

Oh, and by the way, I get any kind that's available. But my preferred brand, of course, is Northern. 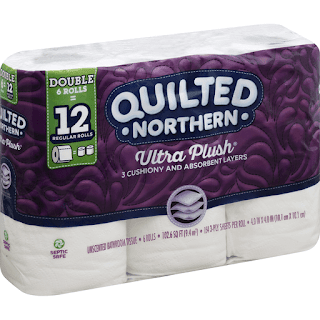 PS: Before publishing, I read this to Himself. Big on rationality and accuracy, he went to the closet and made a count -- there were only nine previously, not thirteen. I'm not worried. He'll be going to the store tomorrow.

Robby said…
What a cute post! I had more than enough when this all started. I hate lugging the TP around because all the packages seem to be huge, and sometimes my preferred brand (yes, Northern) isn't available. So, we're good, but I have started keeping an eye out when i shop. I had a friend who wanted her TP from Costco and was just incensed that there wasn't any for a few weeks. She commented that she didn't want to hoard, just wanted one package for their house. I might have asked if a Costco sized package wasn't pretty much the equivalent of hoarding.
Wednesday, April 29, 2020 9:27:00 PM

Quiltdivajulie said…
I have laughed at the coverage on this particular topic many times - the largest manufacturing facility here produces TP for Walmart and Sam's along with many others. They've been running 24/7 for months now. Their huge (!!) warehouse was emptied in less than a week when the rush to hoard began and they've not filled it back up yet (product goes directly out the door). Maybe it's a desire to be able to control at least one (nonperishable) thing in our lives . . . . but then, I grew up in the north (snow and blizzard land) so I've always been a bit of a "prepper" with extra canned soups, meats in the freezer, and paper products on hand.
Thursday, April 30, 2020 9:10:00 AM

Mrs. Goodneedle said…
Mr Goodneedle cleaned out the basement yesterday and made a run to the local dump. He came home with a 4-pack; such a surprise. When he saw me looking questioningly at him he defended his purchase with "I always stop at the store, just to check". This is humorous to me because our TP inventory is fine, too, I think we've all bought into this-- literally.
Thursday, April 30, 2020 10:44:00 AM

Barbara Anne said…
Love the TP quilt and is it ever a sign of the times or what?!

We had to get TP from Amazon as for 4 weeks there was none at the grocery stores when DH was there. There was no Northern, Scott, or Charmin at the time on Amazon, but fortunately, the off brand we chose (Aria, by Georgia Pacific) is not only septic safe but of good quality.

The highlight of last week was that DH found paper towels at the grocery. What has life come to when that is exciting?

JustGail said…
I think what *may* have panicked some people is realizing how much t.p. they use at work and school and suddenly realizing if whole family, especially if a house full of females, is staying home for weeks was "That's.... HOW much toilet paper?!?!?! And we have only 1 roll left!?!?!??"

The little WM I normally go to has been empty shelves since this started. The grocery has had a few rolls (limit of 1 package per customer) IF they had any. Finally last Friday the grocery shelf was full, but WM shelves still empty. And yes, I do pick up my allowed 1 package, but I'm only going on supply run every 2 weeks. Still no sign of disinfecting cleaners, wipes, hand sanitizers, isopropyl alcohol, or hydrogen peroxide though.