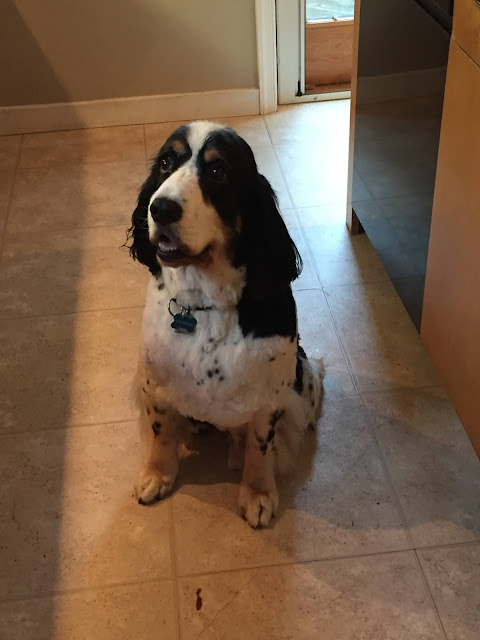 Bloggily speaking, I know I have been quiet of late. This is because we have had a lot of big stuff going on, some of it good and some of it not so good.
One of the not-so-good things has been a sudden change in our dog. Blackberry is ten-and-a-half years old and, in spite of some fatty lumps on his torso and a bit of hip arthritis, he's been pretty lively for a senior citizen.
Until recently. It kind of happened all at once: He became sluggish and grouchy, having difficulty getting up, slow and labored gait, sleeping almost constantly, and being more or less disinterested in his meal. A visit to the vet was inconclusive; she thought it was worsening of his arthritis and put him on doggy Advil. He didn't get better and suddenly he was much worse: tremendous weakness in his limbs on one side, occasional urinary incontinence, walking in circles on the rare times he did walk at all, not looking us in the eye, eating only from one side of his dish (what little he ate), and very grouchy. We thought he had had a stroke and returned to the vet who disagreed. She said that strokes were rare in dogs. Rare, she said, not nonexistent. X-rays showed the arthritis had worsened and she thought perhaps there was a gastrointestinal component. Prednisone was dispensed. Joe had to carry him to and from the car for the vet visit and also to take him outside that day and the next. It seemed to us that he was giving up and we were pretty sure we were going to have to make the Difficult Decision today.
But the prednisone is helping. His appetite has improved, a little. He isn't interested in going outside, but he can be persuaded and no longer has to be carried out. He still sleeps too much, but responds to noises and has begun making eye contact. He's still weak and kind of wobbly with a bit of a list to the left. Last night Joe got him to walk all the way around the block. We kind of think he has turned a corner in more ways than just that one.
Time will tell, and we have plenty of that. No Big Decision today, although I suspect his lively, playful, enthusiastic days are now behind him. As long as he is comfortable . . . .
Email Post
Labels: Family

Lori said…
I'm so sorry! That sounds like it happened so fast, which makes it hard. I know you'll make him comfy and do what is necessary when the time comes. (hopefully not for some time!)
Wednesday, August 12, 2020 8:51:00 PM

Barbara Anne said…
Bless Blackberry's loving and loyal heart and both loving hearts that you and Joe have. It's hard to see a treasured and beloved four legged family member slow down due to age or illness and hope the Prednisone really helps for the long term.

Cherish the improvements you see in Blackberry and this extra time you have with him. May he be part of the family for years to come.

Mrs. Goodneedle said…
I had to brush away tears to read through this all the way. This is the hard part, we're into those senior dog years with Hannes too; he's become a VERY picky eater, sleeps a LOT, and has limited vision and possibly no hearing left-- but it's like you say: "as long as he's comfortable"-- so far he's shown no signs of distress. I am so sad to hear that Blackberry's had such a rough time lately, you are all in my prayers. Sending hugs~
Thursday, August 13, 2020 8:37:00 AM

Quiltdivajulie said…
Definitely not easy or pleasant for any of you. I know you and Joe will take the very best possible care of Blackberry - he is a lucky dog to have the two of you watching out for him. Sending hugs and prayers for you and Joe as you tend to Blackberry.
Thursday, August 13, 2020 10:24:00 AM

Gail N said…
Oh, Nancy, I know from experience how upsetting it is when your beloved dog is not well. I hope the prednisone is the key to making Blackberry feel lots better. Some of the symptoms you described remind me of our Chesapeake Bay Retriever (now in the Best Dog Park Ever) when he would have a flare of Lyme disease. If your vet has not tested him for that, you might ask whether that should be checked. Sending good thoughts your way.
Thursday, August 13, 2020 10:52:00 AM