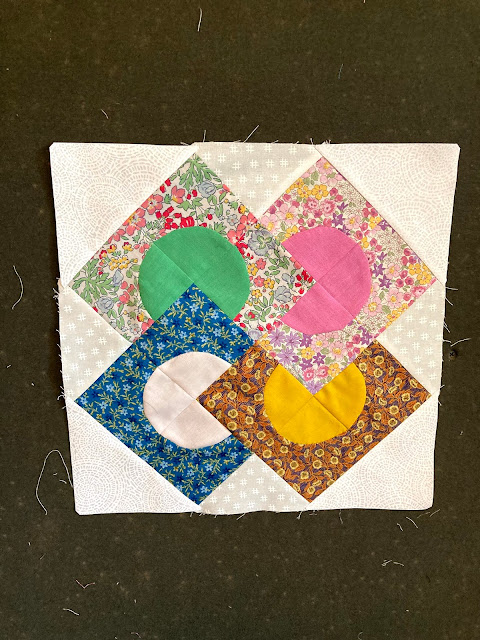 I was whining mentioned to my friend Bobbi the other day that after finishing two Halo quilts and One Steam Punk with the second Steam Punk's blocks about half pieced, that I was having trouble with the notion of starting a new quilt the "old way," i.e., piecing 20 or thirty of the same block on the same background and setting them out in nice neat rows. She laughed that laugh of hers and mentioned that Jen Kingwell had a lot of other patterns, many of which she owned -- along with the templates! -- and would be glad to lend if I was interested. So I went wandering around Jen's site and became smitten with Rising Sun. And decided to buy for myself.

The templates arrived about a week later. Buying them from Oz was awfully pricey due to the postage, but I found them stateside for a much more affordable total.

This pattern combines hand piecing the curves with machining the rest of it.  I'll be using all tiny florals and solids, including some from my treasure trove of Liberty, and each of the 48 florals will be different. The two different "background" pieces are left-overs from wide backing on a recent project.

I have a plan for a smallish, 12-block quilt and now there are just eleven to go!

Barbara Anne said…
Love the Rising Sun block and the fabrics you've chosen! That Jen Kingwell site is full of eye candy, isn't it? So glad you found the needed templates stateside as international shipping is out of sight. This will be such a pretty quilt and I was wondering if you have a recipient in mind for it?

Anonymous said…
Just a question or perhaps a suggestion, are you trimming the background fabric of the circle. It seems to show through the lighter colors. Dotti in CT
Monday, May 17, 2021 6:28:00 PM