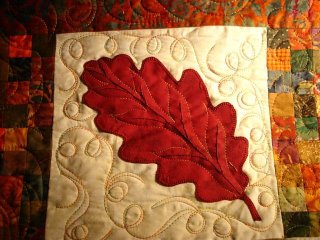 More years back than I am comfortable counting, I participated in a block swap where we made autumn leaves using batik fabric on pale creamy backgrounds. I received many beautiful blocks: oak, maple, sassafras leaves, among others. I was thrilled with them when they arrived and made a few more so that there would be enough for whole quilt of leaves.
. . . .
My sister Bonnie, whose high school nickname was "Miss Efficiency Plus" (talk about a hard act to follow) participated in the swap, too, and she had her blocks together in no time, making a really creative wall hanging that featured a pile of leaves and a rake. I admired it profusely that autumn and several subsequent autumns, actually, and my own blocks stayed in their squishie bag in the cupboard with several similar bags.
. . . . 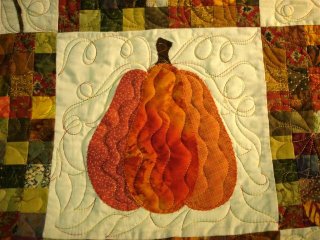 A year or so later, when fall was again approaching, I organized another autumn themed swap; this time we made pumpkin blocks on creamy backgrounds. Such wonderful pumpkins arrived, some with Halloween faces, and others just plain pumpkins. Dawn's pumpkin was particularly magnificent, with a trailing green vine. Oh, what a great quilt they would make!
. . . .
Once again Miss Efficiency Plus got hers together, although I've forgotten exactly how. Maybe that is subconsciously intentional, because my collection of pumpkins languished in the cupboard with the now-forgotten leaves and all of the other sets of blocks from all kinds of swaps.
. . . .
This past summer while looking at my infamous list of UFOs, I came across the leaves, but no inspiration was forthcoming. I set them aside and considered the pumpkins. Again, no good ideas. But I was determined to get one of them together before autumn was over.
. . . . 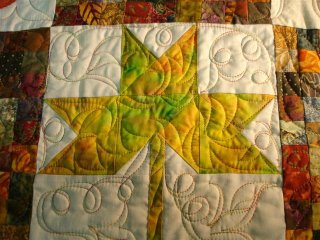 One day during a deadly-dull meeting, I started to sketch something that might work. It dawned on me while some co-worker was making some pointless presentation that the leaves and the pumpkins blocks were the same size, and they could go together in an autumn quilt. I had a November 1 date reserved with the machine quilter, and worked very hard to turn my project into a reality. My plan meant setting aside the three blocks that were jack o'lanterns, but they will at some point turn into a table runner, I think. My project was finished on time and went off to the machine quilter.
. . . . 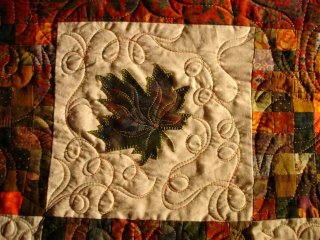 Kat is an absolute genius at machine quilting. She always asks me what I would like her to do with my projects, and I always tell her, "You know better than I do what will be right." So I'm always surprised. And delighted!
. . . .
My quilt came home on Friday, and as of this morning half of the binding is done. I'm so smitten with this quilt and the beautiful work that Kat did to make it something very special. And it will be finished and on the couch back before Thanksgiving! Kat was kind enough also to send me some close-up photos she'd taken of my quilt. So here they are as a preview of my Autumn Mosaic quilt. Stay tuned to this blog for a final picture. Before Thanksgiving!
Email Post

Patti said…
How marvelous! What a great solution. Can you show us a picture of the whole quilt? I want to see how they all went together.
Monday, November 20, 2006 7:39:00 PM

Mrs. Goodneedle said…
Nancy, it's completely and totally wonderful! I am eager to see more, what a fantastic preview!
Tuesday, November 21, 2006 3:09:00 PM