Quilts for and by the Pre-K 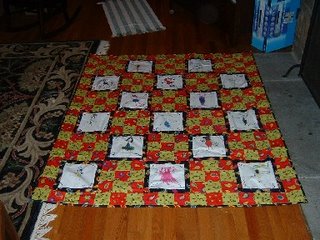 I've written much earlier in my blogging career about my special relationship with the Pre-K class here at school. These kiddies start school at 4-going-on-5; they aren't ready for Kindergarten yet, but are a little too grown up to be in the Preschool. Jenny, the Pre-K teacher, brought them to visit the Head of School one day years ago when it was raining and they couldn't go outside. The Head was out that day, so they visited me and a wonderful relationship began.
. . . .
The school holds a fund-raising auction each year, and when Jenny found out I was a quilter, she invited me to be part of their project. They do self-portraits in crayon in October. In November, as part of a fund-raiser for the fifth grade, these portraits are somehow magically transferred to muslin fabric. In December they come to me to be made into a quilt that goes to the auction. And some Pre-K parent buys it.
. . . . 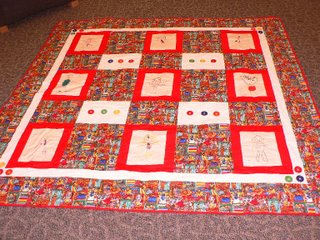 The picture at the top is the first one I made, back in 2004-05. I found Jan Mullen (sp?) fabric on sale at Hancock's of Paducah and it was just perfect for that quilt.
. . . .
The class size varies from year to year. Last year there were only ten. I was greatly concerned about the lay-out. And then fate intervened: One boy withdrew! And so a nine-block lay-out became possible and was so much easier. The background fabric is wonderful stuff -- it is mothers and children in international costumes. And those great big buttons were hanging around for some reason that I no longer recall, and they seemed like a fine addition to this quilt. Oh, and quite amazingly, just after the auction another child joined the class! I can't wait to see this year's self-portraits!
Email Post

Shelina said…
These are both such adorable layouts and fabric for these quilts. Do you find that the prices for the quilts are worth the time and effort you put into the quilt? I am thinking of donating a quilt to my daughter's school, but I'm not sure whether donating money might yield the same $ for them.
Wednesday, November 15, 2006 6:39:00 PM

Mrs. Goodneedle said…
The pattern for the quilt you asked about is in McCall's Quilting magazine, Nov. 1994. If you don't have access to that(through a guild library or something similar)let me know through an e-mail to voigt@alltel.net (please put "pattern" in the subject line)and I'll see that you get a copy of the pattern.
Thursday, November 16, 2006 4:47:00 PM

Susan said…
Those are both great quilts, Nancy. I love the fabrics you used in both. Now I will be anticipating this year's quilt!
Friday, November 17, 2006 2:00:00 PM