Have You Seen This Newt?

Readers who have been with me for more than a couple of months are familiar with the saga of Fig, the newt from the Lower School Science Department who spent his summer in the office with Rich and me. You'll remember (see August Archives) that initially he was on the dull side, but as the weeks went by, it turned out he was a far more complex individual than we'd given him credit for. He exhibited enigmatic personality variations and even had a "near death experience." We decided that we'd like to entertain him again next summer.
. . . . 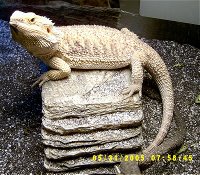 When school reopened, we rather reluctantly sent Fig home to the care of the Lower School Science Teacher. A couple of times I went to visit him; his next-cage-neighbor was a rather intimidating sort of a guy who I learned was a Bearded Dragon. His name, it seems, was Sally, or Linda, or some such. Being a daughter of the '60s, in my mind I renamed him Puff, and moved on. Despite his fearsome appearance, Rosanne assured me he was gentle and pleasant. I decided to take her word for it, and declined her offer to become more well acquainted. I'd come to visit Fig, after all.
. . . .
School is well underway at this point and I've been busy with all kinds of things. Too busy to go call on my buddy to see how he is doing, back in Lower School and all, and getting to know his new colleague Puff/Sally/Whoever. I'd been thinking about it this week though. And then this morning brought this email from Rosanne:
. . . .
Are you ...sitting down? Fig is missing! I came in this morning and he was gone... I don't know if he escaped or there is a more sinister reason for this sad turn of events.....
Sadly,
Rosanne
. . . .
Any information leading to the return of this beloved newt will be generously rewarded, most likely in the form of lollipops, stickers or -- gasp -- animal crackers.
Email Post
Labels: Odd Stuff

floribunda said…
sorry to hear about Fig -- I could probably rustle up a few replacements from garden, though... let me know where you want them sent!
Wednesday, November 01, 2006 8:13:00 PM

Anonymous said…
Oh, gosh--hope you find Fig. My son, Ben, found a gecko just contemplating life on a bag of dog food in PetSmart and returned him to one of the girls who works there. She was less than appreciative and just tossed him back in his terrarium. Made me think we might just should have rescued him. Finders keepers. But, alas, we are not shoplifters even of under-appreciated reptiles.
Thursday, November 02, 2006 2:18:00 PM

Anonymous said…
Has fig been found?