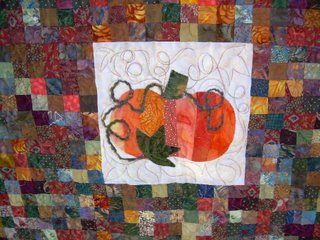 The house is beginning to smell of turkey and there are other good smells, too, including the punkin pie that Amy made last night. She and Andrew are out running errands; Sherry, Sam, and Chris will be here in another hour or so. And this year we have a bonus guest! Joe's sister Janice, who lives in Lovelady, Texas, is in town. I can't think of anything that would take me away from my family on Thanksgiving (Observed), but Janice has always had a deep connection with her high school class, and they chose to have their 50th reunion this weekend. And, as it turns out, far from being away from family, she's double-dipped, having spent yesterday with Joe's brother, et al., and is on here way here now. 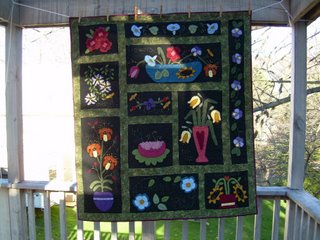 Finally we have a pretty day, after many days of rain here Near Philadelphia. And so DH was good enough to string the line up on the deck a little while ago so we could photograph some quilts. This first one, Woolly Garden, took a long time to make. It was a BOM set that I worked on for more than a year, bonding and then buttonholing one block at a time. Some were done at home in front of the television; others were completed in the summer, at the Chautauqua Amphitheatre. It is all wool except the green lattice and the rose binding. I used a nice black wool for the background, and the BOM kits provided all of the other fabrics. I thoroughly enjoyed making this quilt and was excited when the designer advertised that it was the first in a series of three. But the other two just haven't caught my eye (or my checkbook). Kat did the quilting on this one. I don't make a lot of wall hangings, but this quilt really isn't large enough to do anything other than hang on the wall. So we're thinking of making a place in the living room where we can hang this quilt this winter, and then at the change of season, put something else up there.
. . . . 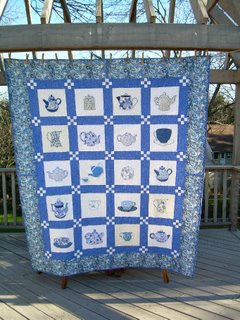 My friend Cessie bought a home at the seashore a couple of summers ago and I wanted to make a new house gift for her. In our crowd of coffee drinkers, Cessie has always opted for tea. And in her family, there is a wonderful tradition of a teacup shower for prospective brides, so this tea-drinking must be a family trait. I looked around for a tea party quilt pattern that I liked and nothing really spoke to me. Turns out my sister was also thinking of making a tea theme quilt for her British friend. So we started a swap. I was just tickled with the blocks that came in for that swap, and had a good time putting them together. I tried a couple of settings before I found the one I liked. I'm still not utterly convinced that the border fabric is the right thing, but when I saw it, I knew I had to buy it. You know how that goes. Branky did the quilting -- isn't it nice? The gang will be getting together next week, and I think I'll give it to Cessie then. After all, we know how chilly those nights at the shore can be, and we don't want her getting cold!
. . . .
The Autumn Mosaic quilt was finished a couple of days before Thanksgiving, and it has been lying along the back of the loveseat in the living room. Today we finally had the opportunity to photograph it. Dawn's pumpkin, featured above, is the one in the center of the quilt. Ooops, gotta go now: It's time to set the table. After all, it's Thanksgiving (Observed). 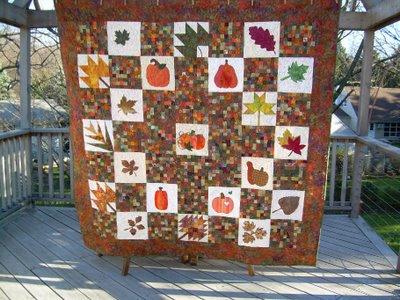 Anonymous said…
Nancy, this is a gorgeous quilt!!!

LoieJ said…
Hi, just found your blog. I don't remember where I saw the link.

I also do quilting, am a Lutheran, a wife and a new grandma. I've been to Philly a few times, as that is where the grandkid lives with his parents.

I also know read one of the Lutheran blogs you link to, but I comment there with another blog name, for my Lutheran related blog.

Mrs. Goodneedle said…
What a Thanksgiving treat! Not only the Autumn Mosaic as you promised but a whole quilt show!! Thanks for sharing... oh, also the scarves are so cute, great job on those!
Friday, November 24, 2006 8:02:00 PM

Shelina said…
Nancy, all three of these quilts are so beautiful. The one with the dark background is so striking. And since you worked on it all year, it is best to hang it up on a wall where it can be properly admired and cared for. The teacup one is really lovely. I like the setting and the fabric, the nine patches really accent the blocks. Teacups in blue are my cup of tea!
The autumn one was is also nice. I really like autumn colors too. It is great to have a whole quilt show. Thank you for sharing.
Tuesday, December 05, 2006 3:11:00 PM