Not the Object, but the Source 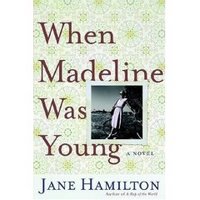 Among my recommendations from Amazon recently was Jane Hamilton's newest novel, When Madeline Was Young. I finished reading it last night, and I'm going to give it an A- or a B+.
. . . .
Soon after Aaron and Madeline marry, she is involved in a freak accident that leaves her physically intact and whole, but with the mind and emotions of a 7-year-old. She's the girl who never grows up. Aaron divorces Madeline, remarries, and he and Julia go on to have a son and daughter of their own. Madeline remains a part of the family, a part of the household as a third child.
. . . .
Much has been written in the reviews about the liberal values of Julia who appears to be almost sickening-sweet but rules the household with an iron glove. The story is told in the voice of Julia's and Aaron's son Mac, now middle-aged, as he looks back on his life and tries to make sense of who and what his parents were and represented. I'm not going to enter into the conversation about whether the characters are credible or even discuss the times when Julia's bleeding-heart impulses may have backfired. Instead I want to talk about Mac.
. . . .
It has been perhaps ten years since I attended a conference on bioethics at a Quaker retreat center. One of the sessions featured a physician whose practice is located in Lancaster County, Pennsylvania. He spoke about a genetic illness that strikes the Amish community. It seems that some of the children progress normally in their development until they are about two or three years old, and then they begin to regress until they return to a mental age of about six months. The Amish people, of course, do not send these "special children" off to institutions. They keep them at home and care for them, dressing them in traditional garb and transporting them in adult-sized strollers. The physician spoke about these special children as being part of the foundation of Amish values, saying, "These children are not the objects of our love and compassion; they are the source of it." I pondered this statement for a long time, eventually understanding it as evidenced by a family in my neighborhood, a family that had twelve children and also was the home of the father's sister, a woman with serious intellectual limitations. Far from being regarded as an annoyance, Aunt Theresa was included in every gathering and gently escorted to and from the car when the family went out. The night that she choked on a piece of meat and nearly died, the by-then-adult children of the family were distraught and the possibility of losing her. I began to understand something that I could not really articulate then or even now.
. . . .
In Madeline, Mac becomes a wonderful loving husband, an excellent father, and a fine physician. In one place he unconsciously reveals how central Madeline had been to his development: He tells how he is so often behind schedule in his office appointments because he can't not listen to the hypochondriac women who come in a need to talk and talk and talk, and go out somehow miraculously healed of whatever had brought them in. And, of course, part of what is behind this excellent physician is his special sister, the source of his love and compassion.
. . . .
It's a good read. Actually, it's a very good read. You won't agree with everything in it, and you may become angry with some of the characters. But perhaps it will make you think. It certainly did me.
Email Post
Labels: Books Thinking

Anonymous said…
I read some reviews of the book but decided I probably couldn't 'take it' emotionally. Sounded profoundly sad. I, too have known some families with mentally challenged relatives who take care of them and treat them as normally as possible. Maybe I can read it 'one of these days.'
Monday, November 06, 2006 9:54:00 AM

Shelina said…
This does sound like an interesting book. I'm going to have to look it up. Thanks for the recommendation.
Wednesday, November 15, 2006 6:50:00 PM