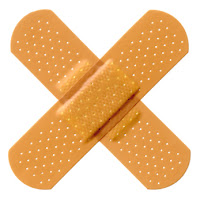 Thank you to those who wrote asking, "Are you okay?"  I'm not.  Not quite.  I hurt.  On the outside and on the inside.

I had an accident with my treadmill.  It was early in the morning, six o'clock, and without my glasses I must have pushed the wrong button, or some other inexplicable thing happened, for the treadmill leaped from the respectable 2.5 mph range I favor to a sudden 5 and even higher.  I was knocked down, and dragged along, scraping the entire outer layer of skin from about a four-inch diameter circle over my right knee and a lesser version of the same wound on that ankle.

And it is difficult to heal -- being on a bendy place, it seeps when I move around.  The seepage tends to stick to the bandage and when the bandage is removed, it pulls off the start of the scab that is forming.  Applying gunk before the bandage keeps it from sticking but prevents the scab from forming.  Air is what it needs, but brushing against clothing is what it doesn't need.  So it is complicated.

A long-term relationship appears to have come to an end.  During a discussion where there were opposing points of view, my friend, like the treadmill somehow, inexplicably leaped from a difference of opinion to a screaming tirade, becoming irrational, mocking, and threatening.  It went on and on and there was nothing I could do.  There was no reasoning with her.  The next day I received a one-sentence, perfunctory apology by email.

And it is difficult to heal -- being as the episode touched me at a deep, deep place that I have not visited in many years.  Bringing back memories of abuse at the hand -- and voice -- of another woman.  And being powerless to reason, powerless to make it better.  A different friend has been a rock for me this week, a friend who has been struggling with far more difficult and painful issues of her own, has made the time to listen and to care for me.

I'll get better.  A decent scab will form on the knee and ankle and eventually will come off.  I'll put on my glasses and trust the treadmill again at some point.  And someday I won't feel so raw from the hurt that came from that terrible episode with the irrational and abusive woman.  Perhaps someday I'll be able to trust her again.

Healing takes time.  Whether it is on the outside or on the inside.