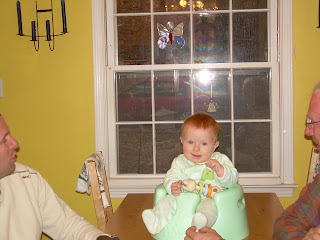 We left Philadelphia a little before six o'clock in the morning on Wednesday to head South.  The traffic on the Blue Route and I-95 was tolerable at that hour, and soon we were in Middletown, Delaware, where we stopped at Denny's for a breakfast.

We stopped again, a few hours later, in Colonia Beach, Virginia (more about which later) and arrived at Tom and Anastasia's house just before naptime.  Our favorite redhead was there to greet us.

Tom has a great many enormous oak trees on his property and this morning Joe, Tom, Nate and Blackberry went outside to rake.  All were exhausted at the end. 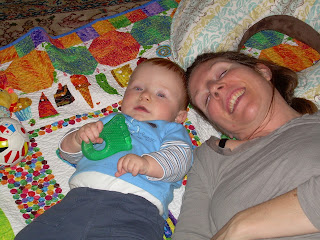 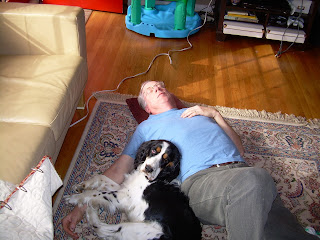 Lynda Halliger Otvos (Lynda M O) said…
Sugar maples dot the half acre upon which we grew in Spring City. Here in northern California the autumn colors are less intense. ~ ~ ~ There is a rogue Sugar Maple in Yosemite Valley and the display, though short, elicits gasps from the tour patrons.
Thursday, November 25, 2010 6:47:00 PM

Mrs. Goodneedle said…
Nate the great is one handsome little boy! Love that photo of him in the Bumbo, just can't stop looking at his gorgeous eyes!! Enjoy, my friend, enjoy~
Friday, November 26, 2010 6:25:00 AM

Pamela Kieffer said…
Good morning,
Do you think your team would come down to Virginia for some more wonderful fresh and exercise. We have a BIG backyard with oaks and other shredders.
Friday, November 26, 2010 12:11:00 PM