A Most Welcome Surprise 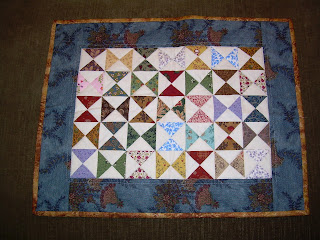 Did you ever wonder what Julie in the Barn actually does in the barn?  Friends, I'm here to tell you that she's  not just milking cows and rolling in the hay and whatever else people generally do in the barn.  She making mini-quilts.  Like this one.

I had to work today, which is most unusual.  Our school is doing a special project, and I needed to be there today from 8:30 until 5:00.  That's the downside.  The upside is that I'll get all of Wednesday off in compensation.

I was a little bit gruntled as I set out, though. For one thing, I had to stop at the store first for head cold medicine -- the early warning signs began yesterday afternoon and by bedtime I was snarfy and schnucky and, of course, we were totally out of remedies.  And for another thing, someone deliberately did some damage to my car yesterday, a deep jaggedy scrape in the side of the door made with some sharp thing or another.  Right under the handle on the driver's side door.  So I'll see it every single time I get into the car.  Until I can get it repaired.  Sheesh.

The project at school went okay.  The work was interesting and people were enthusiastic and all went well.  Up to a point.  Two points, actually; the first when the computer Regina was using refused to save her file but didn't tell her, and the second when the huge newsprint sheets we were working with somehow got scrambled and we couldn't sort out the categories.  But it all worked out and I came home . . .

. . . to find that Julie's swap blocks had come and along with them was this absolutely wonderful mini-quilt. So it is true, then, as they say:  All's well that ends well, and that's my day today, here, Near Philadelphia.

Julie in the Barn said…
I hope the little quilt helped ungruntle you after a vexing day. I seem to be stuck on making little mini quilts and the old barn has run out of spaces to display them. Hope this one finds a spot in your home.
Saturday, November 20, 2010 7:32:00 PM

AnnieO said…
Sorry you're beginning to get sick, never a fun thing once cold weather starts (as if it's fun anytime else either!) The mini is gorgeous. The keying of your car is a bit disturbing.
Sunday, November 21, 2010 12:05:00 AM

Diana said…
What a nice surprise! Hope your cold gets better quickly so you can enjoy your "bonus" Wednesday! (So nice to have an extra day off before a holiday.)
Sunday, November 21, 2010 9:57:00 AM

Pat said…
ARRG. I hope you don't have what I have and this is not a WO after-crud. Get lots of rest.

Julie: I LOVE that word "ungruntled" (and the mini quilt)!

Angie said…
This is the most adorable post. I'm sorry you're suffering with the same yuck that I have, but oh how fun to receive such a warm 'pick me up'. :D
Hugs and Happy Thanksgiving!
Wednesday, November 24, 2010 10:24:00 AM