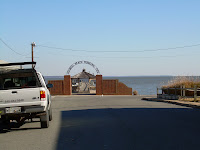 On the way down to Richmond, we stopped at a little town called Colonial Beach, on the Potomac River.  We had the idea that it could possibly be a place to take a vacation.  Joe could bring Windspirit and sail on the Potomac.

It was a nice enough little burg, if on the sleepy side.  But, then again, it was the end of November in a summer place. 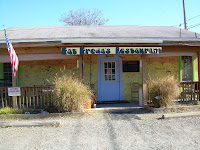 We had a surprisingly good lunch at Fat Freda's Restaurant "where the locals eat," according to Peggy, the very helpful proprietress of the Chamber of Commerce office.  It was a folksy kind of place, a lunch or supper spot, with a full page of sandwiches and three or four kinds of soup to choose from.

We split a roast beef on ciabatta and had some rather spicy tomato soup and "sweet tea." 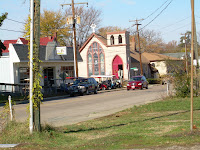 For a little bitty town, it seemed a bit overchurched, especially in the Baptist division.  There were at least six of those, two Episcopalian (of which this is one), a Methodist, and a kind of run down Roman Catholic.  This church seemed to be a happening sort of place with an adjacent thrift shop and a rector with a last name that looked a bit like an eye chart. 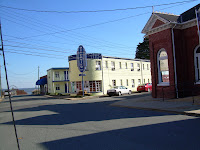 Interestingly, Colonial Beach was a self-proclaimed "golf cart community" and here and there we saw someone driving rather crazily in one of them.  There were at least three places to buy a golf cart.  It didn't appear that seatbelts were required in them, either!

The architecture was varied -- this motel caught my eye, though the reviews on one of the travel sites were just dreadful! 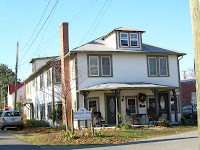 In addition to the picturesque motel, there were a couple of bed and breakfasts in town.  This one was pretty close to the river and had a tiny gourmet take-out place on the back side.

We had a pleasant time on this little visit, but probably won't be returning any time soon. 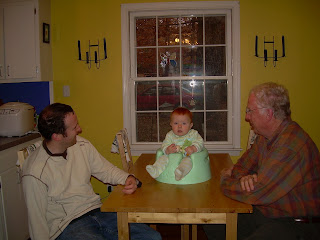 About an hour and a quarter later, we'd arrived at Tom and Anastasia's, where they had the most wonderful centerpiece on the table!

Unknown said…
The big attraction to Colonial Beach is the Potomac River it is six miles wide and a truly magnificent body of water which is great for boating, swimming, fishing and many water sports. Check out the unbelievable deals for new waterfront homes at Monroe Point, the beach's newest most upscale residential community. WWW.MonroePoint.net
Saturday, November 27, 2010 11:29:00 AM

Katrina said…
Check out Colonial Beach during the summertime - especially the 2nd weekend in June when they have their big Potomac River Festival. It's so much fun!
www.colonialbeachvirginiaattractions.com
Sunday, November 28, 2010 5:23:00 PM

Anonymous said…
Colonial Beach is a wonderful little town. I used to go there every summer when I was a teenager and continued to go when a parent. The people are friendly and its a wonderful place to be on a hot summer day. Miss you CB town!
And a point to be made,there are wonderful historical sights to see with in driving distance of the beach. You're with in driving distance of George Washington's Birthplace and quite few more,plus a wonderful winery.
Instead of belittling a place,you should get to know more about it.
Sunday, November 28, 2010 8:20:00 PM