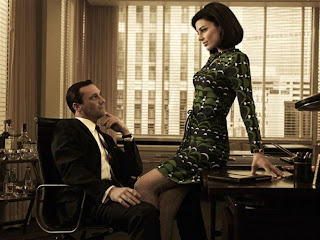 I don't watch very much television other than some of the programs PBS shows on Sunday nights and some of the baseball games. I haven't gotten involved in a weekly show since "The West Wing" went off. At lunchtime at school, other teachers talk about the series that they watch, and discuss the plots and the characters. I listen but have nothing to offer.

So Joe and I are possibly the last people on earth who haven't watched "Mad Men." Until now. Someone at school told me that it was an excellent show and thought I would enjoy it. That person was right. Sort of.

Set in the early 1960s (why am I telling you this since I am the last person to watch it?), the show takes place at an advertising agency in Manhattan, and the segments that we have seen so far (about six, I think) revolve around one Dan Draper, his family and neighbors, his coworkers, and their families and coworkers. There is a lot of drinking involved -- in the office, even, and certainly at lunchtime. Nearly everyone smokes. A lot. And the men fool around, as do some of the women. I am fascinated by it.

Because in the early 1960s, I worked as a secretary in an advertising agency in Philadelphia. Nearly everything in the television show is spot on -- the hair styles, the clothing (even the nightgowns and negligees and bras), the slang. But not only that, at the agency where I worked most people smoked (yes, of course I tried -- I wanted to fit in -- but I never could inhale). Martini lunches happened. Some people had bottles of liquor or flasks in the office. "Matinees" occurred. And none of these things seemed to be frowned upon. I worked in advertising for a few years, starting when I was eighteen and moving on shortly before I married at twenty-two. It was fun and it was exciting and oh! so glamorous.

But even then, it felt unreal. It felt like I was in a play rather than living a real life, and because I was less sophisticated than many (at least at the get-go), I flubbed my lines regularly.

Watching "Mad Men" has taken me back to that time and I'm just as fascinated and no less comfortable this time around!

Anonymous said…
I only get basic cable, so I haven't seen this show. I worked in a large office building during the early 70's, and from what you describe, advertising wasn't the only place for drinking, smoking and foolin' around. Thanks for sharing.
cindy
Thursday, April 18, 2013 7:41:00 PM

Barbara Anne said…
We have cable, but haven't seen the show so you weren't the last to see it. I had no idea of the setting or plot so appreciate your inclusion of those details.

I became a nurse in 1972 and there was much talk about the hospital being a "Peyton Place" but I pretty much missed that as I married in 1972, too.

howdidIgethere said…
See? You're not the last one to watch! I haven't either, mostly because of my own little OCD desire to start watching from season 1 so I can follow the entire story. Since it's something like season 5 (6? 7?) now, I figure I'll need MONTHS for all the videos, and then only if I devote my screen time solely to MM. (But perhaps this response has said more about ME than about the show...) /slinks back into her quiet corner

Smoking was widespread in the late 60s/early 70s when I "came of age" and I took to the habit all too well! Now that cigarettes have been scrubbed almost completely from entertainment, their inclusion in a "period piece" like MM really attracts attention. Didn't run into the alcohol fixation -- nor the "nooners" -- in my corner of the world, though.

Quilting Corner said…
Hi, I agree. I worked in Philly in Center City at the time for a health insurance company. Everyone smoked, the cloths, hair cuts are as it was. It brings back many memories for me too.
Saturday, April 20, 2013 4:17:00 PM