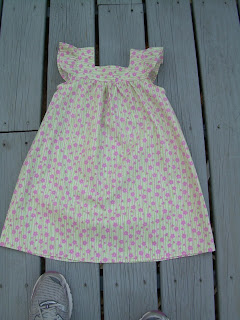 Joe and Blackberry had the opportunity to go camping for part of the weekend with Sam and his father. Oddly, I wasn't invited. But I would have declined, anyway.

I have a little girl's dress pattern that I love, and it only goes up to size 5. Guess what size Caroline is this summer? Yup. So it's my last chance to make this dress for her. I made her two or three of them last summer, when she was a 4, and I understand that she wore them a lot.

So yesterday I got this one made (didn't realize my shoes were in the photo). When Sherry phoned to say that she and Caroline were having a Girls' Day and would I care to join them for dinner, I quickly gave the dress a final pressing so I could give it to Caroline to take home. 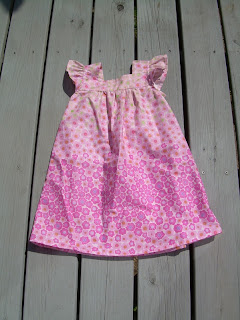 When they picked me up for dinner, I heard the details of their Girls' Day. They'd done their nails, all forty of them, and then went out shoe shopping. Of course.

We went to the newish Italian place down where Rizzo's used to be (nod to Marsha here), and while Caroline downed bread and spaghetti and meatballs, Sherry and I enjoyed paninis. Claiming to be too full for dessert, we headed back to my house where Caroline really liked her finished dress, and really liked this second one that was nearly finished, and really liked the chocolate moose tracks frozen yogurt that we found in my freezer.

I got out a couple of patterns and a couple of pieces of fabric and we had a bit of a consultation on where to go from here. 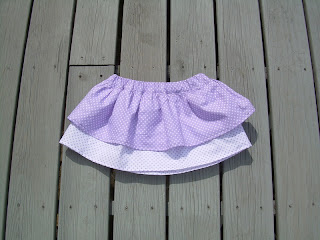 The two-layer skirt I made last year had been a hit, so I had picked out these two lavender fabrics with another one planned and, fortunately, Miss Caroline was of the same mind. So this was today's project.

Next up, I think, is the nightgown pattern. And then perhaps another pinafore dress. Or two.

OT Quilter said…
What lovely new clothes for your grand. Caroline is so lucky to have a grandmother who sews for her. My mother made many things for my daughter, including many Halloween costumes--treasures, all!
Sunday, April 28, 2013 3:43:00 PM

Three Birds Inspired said…
Sweet dresses and I bet they are just so much fun to make!

Janet O. said…
Such pretty little things for a sweet girl. Lucky granddaughter--and lucky grandma! I'd love to sew for my only granddaughter, but her other grandma lives by the local outlet malls, and shopping is her hobby.
Enjoy creating for Caroline. Halloween costumes are about the only time I get in on the action! : )
Monday, April 29, 2013 12:23:00 AM

Quiltdivajulie said…
Good that you are having fun!! (moose track fudge anything is delightfully evil)
Monday, April 29, 2013 9:57:00 AM

Barbara Anne said…
Awwwwww! What a sweet delight to dress a little girl! Adorable patterns and happy delicious fabrics, all girly to the max. Bliss!

Susan said…
Nancy, what is the name of the pattern you used for Caroline's darling dress? I would love to make it for my own granddaughter!