An Unusual Form of Stress 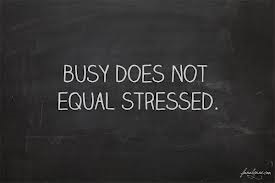 This is going to be an odd sort of post and it could turn out to be long. We'll see.

It is a month now since I left my job at the school, and three weeks since I began my new part-time at the church. During that time I've had a lot of time to think, to reflect, without that thinking and reflection complicated by worry about What Comes Next (which had occupied my thoughts almost non-stop for the previous two and a half months).

I cannot tell you how good I feel.

I cannot tell you how good I feel.

I do not feel stressed. For the first time in a very long time. I come home from work and I putter around the house, I catch up with my on-line Scrabble games, I read, I play at the computer. Sometimes I sew. Let me say that again: Sometimes I sew. This is in great contrast to Before. Before I left the school, I had to sew every day for as long as possible. I was just driven to do it. Something that had begun as a pleasure had turned into an obsession.

I have thought this through, and here is what I have come up with.

For thirteen years I worked in a job where I did not have enough to do. This is something that not very many people know.

I am a fast (and accurate) typist and I do my work efficiently. I enjoyed the work that I did. But there was not enough of it. I invented things to do to keep busy so that the time would not drag. I felt like an anomaly -- many of the people that I know talk at length about how overworked they are, how crazy-busy they are at work -- I always kept very quiet during these conversations. I needed to appear busy when there was very little for me to do. I played a lot of on-line Scrabble. I wrote a lot of blog posts.

You may be wondering why I did not ask for more to do. I did. Every summer at my annual evaluation, I would tell my boss that I could do more. More in quantity, more in scope, more in depth. I suggested that he delegate to me projects that he ordinarily would give to another person, one who always appeared to have way too much to do, and in fact, said that was the case. I was capable of doing more, and I wanted to grow. But it never happened.

And now, away from that atmosphere, I realize the incredible stress that I was under for thirteen years. Stress of needing to appear busy, to manufacture tasks to occupy myself, to help the hours to pass. And when I got home, I think, I sat down at that Bernina and turned out project after project, flimsy upon flimsy, out of a nearly desperate need to be productive, to be creative, to be busy.

I don't know whether I'm right or whether this even makes any sense. Honna seems to think it does. And, really, it doesn't matter one way or the other. I know that I feel good. That I do not feel stressed. That I feel more like who I used to be, a long, long time ago.

Before. Before I worked at the school.

Jayne Honnold said…
I think you have assessed the situation accurately. I have never been particularly efficient, but I sure admire those who are! ;)
Saturday, May 18, 2013 8:45:00 PM

LizA. said…
What an interesting observation. I trust that this realization has helped ease the transition to this new journey you are on.
Saturday, May 18, 2013 10:01:00 PM

Janet O. said…
Isn't that a wonderful feeling--feeling good? Sounds like you have done some serious introspection and understand where you were and why this feels "good". Glad you are where you are, Nancy!
Sunday, May 19, 2013 12:03:00 AM

Lynda Halliger Otvos (Lynda M O) said…
Being under-utilized is as stressful, if not more so, than being overworked I think, and you found that to be the case as well. I am so happy that you are finding satisfaction and peace in the new situation. Being driven is hard on our psyches as well as our bodies.

Sandra Coleman Clarke said…
Thank goodness this is a wonderful thing. Worrying over small stuff !! I thought this would all work out to your benefit and I think it has. Great!!!!!
Sunday, May 19, 2013 2:18:00 AM

Barbara Anne said…
Cheers for feeling so much better each day and throughout your days!!!

Your thoughts about you previous job and how the lack of meaningful productivity was stressful seems quite accurate to me. I admire your taking the time to think this through and puzzle it out, too.

I hope your new job makes good use of your skills so you stay pleasantly busy because that would be so much more nicely balanced.

Quiltdivajulie said…
You hit my nail dead on the head. i, too, am capable of more than my job entails - more than unjamming the copier, more than changing toner cartridges, more than typing what will be edited and re-edited 9-15 times before being "finaled", more than answering phones for the receptionist's breaks, more than showing up and sitting in a dark, gray place for 8 hours a day, more than helping people get their personal and family events/matters typed and prepared for publication/printing . . . I look busy - researching online, cleaning out and organizing explosive file folders, scanning papers for future storage . . . and YES, IT IS STRESSFUL beyond words. It is also exhausting and discouraging.

I, too, rush home, compelled to create with my fabrics and encourage my husband to create in his studio -- as a way for both of us to stay sane and retain our humanity.

What an odd paradox . . . I love the weekends because I can be myself. I dread Monday mornings when I must return to being subservient on demand.

Lcrrkhs said…
It makes perfect sense. I am underworked right now too and it is too much stress to bear. I am so happy to hear you are in a better place, but literally and figuratively!
Sunday, May 19, 2013 12:01:00 PM

suz said…
Balance is very hard for people, especially women. I think you may have hit the nail on the head. You were compensating. Hopefully, with this new position, you'll find a happier balance. Puttering around is okay - we have to remember that.
Monday, May 20, 2013 8:47:00 AM

Quayquilter said…
I find this very interesting as I realise when looking at email lists that many people are posting when at work which was alien to me. Libraries are like houses, there's always something to do. I can now see not having enough to do can be just as frustrating as too much. Your post also conforms my belief that on the job front at least a setback can often turn out to be a blessing. Enjoy your sewing and puttering.
Tuesday, May 21, 2013 9:28:00 AM

sandra said…
It looks like losing your previous job and getting a new one is going to be the best thing, even though it was horrible at the time. It seems to me that in your previous job there was always a feeling of having to prove yourself, or justify your worth. And now that has gone, you are free to be youself. The future is looking good!
Wednesday, May 22, 2013 6:34:00 PM

Irene L. said…
What do they say "Don't sweat the small stuff". Good for you Nancy. At times we don't even realize how bad things are until they are not there anymore. I am so happy that you have found a happy place. Best of luck!
Friday, May 31, 2013 2:15:00 PM