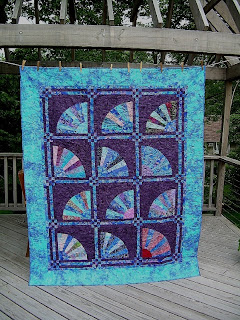 I have been doing some organizing of photos on my new laptop. I had spent some time a month or so ago importing files from two previous laptops as well as the computer I had used at the school. There were a great many photographs of all kinds, and when I finish my coffee in the morning, sometimes I spend a little time moving them around and putting them in folders. There are, as you might expect, a few photos of quilts I have made. Some of them are pretty old and it may be that I've not shared them before.

This fan quilt was a Confirmation gift for a young girl who is now finishing her Freshman year in college. The fabrics are all batiks and some of the fans were made by friends in one of those swaps where one person shares a couple of pieces of fabric and a plan. I'd always wanted to make a fan quilt so I sent out two batiks and asked participants to use only batiks in completing the fans. Since I was a big fan of Ali's, I thought she should have this quilt. 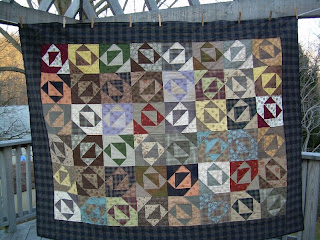 This quilt lives in our living room, on the back of Joe's chair. I had gone to the big quilt show when it was at Fort Washington, years ago, and in the last aisle of vendors ran into Maria from Pinwheels who had a quilt on display that was different from anything I'd see before. Turned out it was a new-to-the-U.S. kind of fabric called Daiwabo Taupes, and the quilt -- called "You've Got Mail!" -- was available as a BOM. I signed up right then and there. As I worked on the blocks, Joe became more and more drawn to them, and claimed it for his own. The border wasn't part of the BOM; we picked it out together from the fabrics on line at Pinwheels. 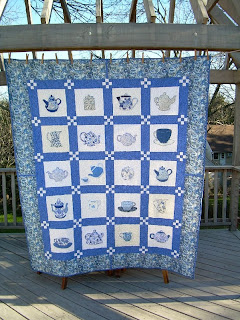 Tea Party began as a swap that I initiated where people would applique teapots, tea cups, sugar bowls, etc., using blue and white fabric that resembled china onto white backgrounds. I wanted a gift for a friend who is a tea afficianado. She had recently bought a home at the shore, and I thought a housewarming gift would be in order.

The swap yielded perhaps half of the blocks that I needed for Cessie's quilt, so I spent the next few months planning and making the additional ones needed for the quilt.

I haven't done much of that buttonhole applique recently, but have a project for this summer lined up that uses that particular technique. 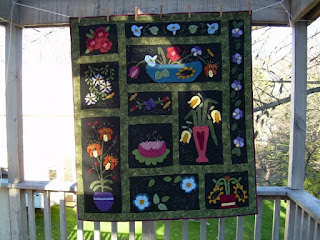 Speaking of hand buttonhole applique, this is one of my favorite projects. It was another BOM, and I can't remember the source at the moment. I can't even remember whether the wool fabrics were included or whether I had to acquire them myself! I do remember sitting at the Chautauqua Amphitheatre hand buttonholing bloom after bloom, and embroidering the names of the flowers.

This is the end of this little quilt show. It has been fun to revisit these old friends. Perhaps today I'll start tracing the elements for the next hand-buttonhole project -- a transportation quilt for dear grandson Eli!

Janet O. said…
What a great show, Nancy. I love the batiks in that first one--very cool and pretty. I'm not familiar with the fabrics you mention on the second quilt, but I think the quilt has a great masculine look to it--no wonder Joe was drawn to it.
Very pretty teacup quilt. Nice job designing that.
The wool applique is gorgeous. Just started doing such things myself this year. Very therapeutic, with wonderful results. I look forward to seeing your new project.
Saturday, May 25, 2013 11:50:00 AM

Barbara Anne said…
What glorious quilts, each so interesting, and so very different from each other!! Applause, applause!!

Don't you love the infinite ways quilts can be unique from any other quilt on the planet from colors, to fabrics, to patterns, to fabric placement, all the way to settings and bindings, and quilting stitches?! What creative freedom we quilters have.

Thanks for the quilt show!

Jayne Honnold said…
Organizing photos - now there is a task! I've done a bit myself, lately, but nothing nearly as comprehensive as you! Thanks for sharing the show!
Saturday, May 25, 2013 12:45:00 PM

Gretchen said…
Lovely quilts!! I admire you for organizing your photos. They do get out of control on various laptops, phones, etc.
Saturday, May 25, 2013 3:07:00 PM

Anyway - organizing photos brings back lots of memories and takes a LOT of time. SO well worth it, though.

Tanya said…
Ooh. Such pretty quilts! I have yet to do a buttonhole applique. And the colors in the batik quilt are just wonderful!
Saturday, May 25, 2013 6:11:00 PM