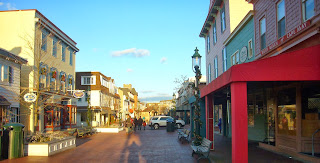 On Saturday we drove down to Cape May to have dinner at Louisa's. It had been about a year and a half, so we were way past due.

We left after lunch. The drive takes two hours at best, and we accomplished that, arriving around two o'clock. We walked down to Cheeks at the Beach and then past The Mainstay and around the Hughes Street block before getting to the mall.

It was nice that the mall and, in fact, the whole town, wasn't deserted. There were people here and there, in and out of the shops. We went to our favorite shops and tried some new ones. We were surprised at how much money we spent on things that weren't in our minds! But we had the Christmas List with us, and that accounted for some of the spending.

We were among the first to arrive at Louisa's and it was totally full with people waiting when we left about an hour later. Joe tried the leek and potato soup, something we've thought about before, and liked it. I had a last-of-the-2013-Jersey tomatoes and fresh mozzarella salad. We both had cod. With the signature brown rice and light cabbage salad, I always feel virtuous about my eating, so had a piece of absolutely delicious fig cake.

Then we went out to shop walk some more before the drive home.

It was a delightful afternoon and evening, and I'm so happy that we did it because today the weather has turned raw and cold, even with a bit of flurries in the early morning, and we probably wouldn't have thought of going to the shore again until spring.

Linda K said…
Our day trips to Cape May were one of the best things about living in Sewell, NJ. Glad you were able to go one more time before winter. Today is our 42nd wedding anniversary and I planned on a day trip to an apple orchard in North Georgia, but it's 28 degrees out right now and I have a rotten cold! Think I'll be staying in my PJ's ;)
Wednesday, November 13, 2013 8:57:00 AM

AnnieO said…
An out of town trip with the hubby sounds wonderful. I sure would like one of those! Thanks for sharing.
Thursday, November 14, 2013 12:16:00 AM