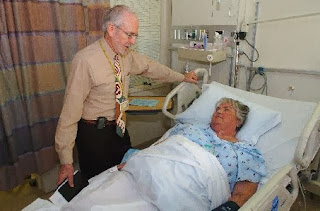 After seminary graduation, I was a bit at loose ends. I still felt as though hospital chaplaincy was where I belonged, and I loved theological education. I was earning enough money as a part-time at-home medical transcriptionist, and enrolled in the S.T.M. degree program at the seminary, choosing a concentration in pastoral care and taking one class at a time..

No longer a full-time seminarian, all I knew was that I still believed I was called to hospital chaplaincy. Part-time medical transcription was placating the demands of the checkbook. The way to do pastoral care in hospital was to do more CPE. I was accepted into a learning group at a different inner city hospital where for an academic year I spent parts of two days week in group work and floor work, this time covering the kidney transplant and oncology floors. I learned a lot more.

At the end of that year, I applied to and was selected for another part-time CPE unit back at the first hospital. The group was, again, diverse, and I learned more and more about hospital ministry and about myself as I spent two days each week and on-call every Thursday night. I began to branch out -- in addition to the floors I was assigned and the on-call in the ER/Trauma Center, I spent time with exhausted, drained medical staff and more time with families of very sick people. I well remember the day that a Mafia kingpin was brought into the ER. He passed away within moments of his arrival, and I spent much of that afternoon with his bewildered and immaculate wife and several men in suits whose connection with the deceased remained unclear. I didn't ask a lot of questions. One day the President was coming to Philadelphia and a trauma bay was kept at the ready along with a blood supply; fortunately, they were never needed.

A second unit followed back-to-back with the first and at the end of that time I had completed four units and much of the S.T.M. degree.

Six months or so later, I found myself at loose ends. I was close to the end of my studies and was no longer in a hospital setting. At-home medical transcription was lonely work. When a telephone call came from the school where I had worked before going to seminary, a call telling me that the head of school was without an assistant and would I like to return, I accepted the offer. I had not lost the feeling that hospital chaplaincy was where I was supposed to be, but it seemed impossible, so I closed that door and embraced Quaker education.

Brenda said…
Hi Nancy: I wanted to let you know I've been following your long story around education and chaplaincy. I just finished my MA in theology and many of my classmates were doing CPE courses and some have gone on to be employed in spiritual care. Thanks for sharing this story.
Wednesday, November 27, 2013 9:09:00 AM

LizA. said…
I think I know where this story is leading and if I'm right, I'm very happy for you. I would say that it was definitely "meant to be". I suspect that you will enjoy it and find it just as rewarding and fulfilling as you did when you first worked in CPE.

Happy Thanksgiving to you and yours. May you be surrounded by much love, joy, laughter and happiness.
Wednesday, November 27, 2013 11:40:00 AM

Barbara Anne said…
What an interesting and inspiring story. Clearly, all of your education and experiences have kept you on the path meant for you. Remember, ministry is where your gifts meet the needs of the world.

You have me hooked and eagerly awaiting the next chapter.

Janet O. said…
I'm seeing where this is all leading, I believe, and I am excited to know the details!
Keep it coming!!
(And I am thrilled for you! Couldn't happen to a person better suited!)
Wednesday, November 27, 2013 4:06:00 PM

Tanya said…
I so admired you and the people that can do this sort of chaplaincy. I fumble around and have no idea of what to say or do when even close friends end up in the hospital and I'm afraid when the outlook is not good then my steps are heavy going to visit them.
Wednesday, November 27, 2013 8:14:00 PM