Eight of us spent the weekend away in Lancaster County. Oh, it was grand! Helen and I have been going out for a weekend twice a year for more than ten years now, and some of the others nearly as long.

The place we'd been staying, a small bed and breakfast, closed a couple of months ago; we initially went into panic mode, fearing that our semi-annual getaways were over. Then we began with research mode, ultimately settling on a professional retreat center just ten minutes farther from home than our previous place. Of course change is hard (and for Lutherans, very hard indeed!) and for the last couple of days before we went, Helen and I shared many anxious emails.

But not to worry! All was well; all was far beyond well!

Helen, Judy and I began Friday together with lunch at TDFKAZ and then -- since Gene had thoughtfully sent a generous coupon in the morning email -- trundled out to Burkholder's for retail therapy. I'd initially thought of going to Intercourse and wandering around there for a bit before checking in at the retreat center, but after leaving Gene's place, decided to go straight to our destination with the hope of a wee nap before the fun began. 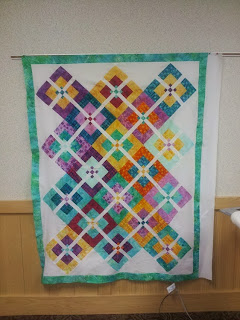 The sleeping rooms were pleasant, comfortable, and generously sized. The work room was spacious and well-lit with lovely cork strips on the walls. We had been provided with as many work tables as we wanted; there was even a podium which I used for making announcements! Despite missing Marsha, who had to bail out for a family function, the eight of us had a splendid time. There were other groups retreating, and the delicious and abundant meals were taken together, cafeteria style, with assigned tables. We became friendly with a group of women who were meeting down the hall; at first they cautiously lurked around our open door, but after being invited in, they returned often and bringing their friends.

I didn't remember my camera, so I don't have photos of the projects I worked on (though I'm hoping someone else took some and will send them to me). These two beauties are Kathy's work; she is a prolific quilter who does a lot of different kinds of things. I will share any additional photos that I receive from our lovely time together.

Janet O. said…
"Of course change is hard (and for Lutherans, very hard indeed!) "
Nancy--you make me laugh!
I'm glad you had a good time! Was Grace from Maine in the group with which you mingled? Seems she was there at the same time, but I'm not sure where her retreat was held.
Monday, November 04, 2013 2:39:00 PM

Anonymous said…
I am so glad your week-end was a good time. Makes me yearn for February when the first of my "retreats" will be here. Unlike you I do not finish much.
Monday, November 04, 2013 8:10:00 PM

cityquilter grace said…
just returned from a week retreat in lancaster myself...didn't get to burkholders but log cabin quilts, fabric shack, sauder's and old country store made up for it...and how!
Monday, November 04, 2013 9:36:00 PM

Barbara Anne said…
What a glorious weekend you had with great friends, new friends, great shops, and yummy food. You can imagine a pretty shade of green as I, too, am green with envy. Sigh!

Quayquilter said…
I love seeing the great work we "ordinary" quilters do a bit of a a rest to the eyes after some of the excesses of Houston M.
Tuesday, November 05, 2013 6:38:00 PM

Sarah said…
Hahaha you make me laugh. My husband is Lutheran and my family is Anglican. I grew up hearing the jokey stereotypes about Lutherans like not liking change nor spending money. However, I think my husband was a little surprised to hear these stereotypes. He hadn't heard them before! Can't poke fun at himself!
Thursday, November 07, 2013 5:02:00 AM