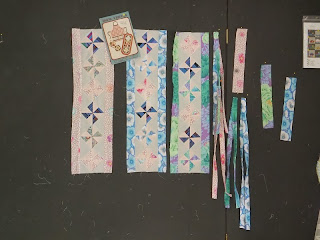 For a few days, the design wall looked like some kind of a chop shop -- I had begun making three aprons and was working on them simultaneously. First I made the eighteen pinwheels, then cut the side triangles and pieced the strips; the borders, top bands, neck band, and side ties were also made assembly-line style.

I was having a wonderful time! The project was the kind of thing that if I only had a little time, I could do a little something. And by this morning, my chop shop wall looked like this!

I had bought yards and yards of a pale grey with white dot fabric and had used some of it for something else, but there was still enough for three apron bodies, and that was the fabric I had in mind when I'd opened the chop shop. 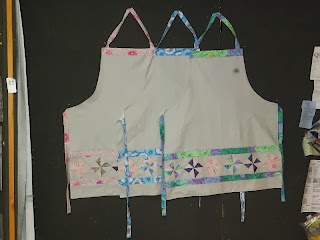 Spent a fair amount of time downstairs sewing today (certainly I wasn't going out to get in the crowds of shoppers!), and now the design wall looks like this!

Loving these aprons. Might have to make one for myself (these are for three friends who do not read the blog, silly people). But first, I've string pieced three pair of potholders from the same fabrics and as soon as I get some Insul-Brite (tomorrow!) I can sandwich and quilt them, and bring them up to the living room to be hand bound in front of the Netflix screen (yes we're watching "Orange is the New Black"!).

The two quilts for my three-year-old grandsons are at the machinists now and I'll be picking them up prolly on Tuesday. I have begun work on a tote bag for another recipient. With my purchased gifts almost complete (and most are even wrapped!), I'm enjoying the hand-made part of Christmas.

That black spot that appears on the photos is courtesy of the camera lens, not big oil blotches on the projects!

Barbara Anne said…
What happy happy aprons and I am impressed you made the entire aprons! Applause!

I've given AMIL a couple of aprons, but started with canvas aprons you can buy at crafts stores, then added fussy cut fabrics. They wear well, but need to ironed after washing.