In Which My Studio Becomes a Foxhole 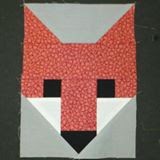 I like to think that I don't have to jump on every single quilting bandwagon that comes across the internet. I generally don't want to make what everyone else seems to be making. Usually, if anything, I'm late to the party -- having decided to get involved with a particular popular pattern, block, or technique well after most people have moved on.

Or perhaps I'm behind once again. I made my first Fancy Fox block yesterday, followed in rapid succession by nineteen more. The pattern is by Elizabeth Hartman and I bought two of it last month -- one to keep and one to give.  The pattern comes in two forms: via snail mail or downloadable pdf. The instructions are clear. The illustrations are full color, explicit, and plentiful. I'm so smitten with the foxes that I went ahead and bought Elizabeth's Hazel Hedgehog pattern, too. You can buy the patterns directly from Elizabeth or from a bunch of other on-line sources. Use your Google.

The foxes are addictive. With the current baby boom in my extended world, I'm making baby quilts. The first set of twenty is made from a layer cake I had from before I took the pledge, and fabrics are perfect and gender neutral. Already I've cut strips for a "boy" version and a "girl" version.

And then it will be on to the hedgehogs!

Oh, and I solemnly swear that Elizabeth Hartman has paid me no money, fabric, patterns or other compensation of any kind. Heck, she doesn't even know I'm writing this

Susan said…
Oh my goodness! That hedgehog is way too cute. I may have to get the fox pattern as well to commemorate the family of five kits who were living under our gazebo last spring.
Saturday, January 24, 2015 5:10:00 PM

Janet O. said…
I have a granddaughter who is currently crazy about foxes. This would be perfect for her!
Thanks for bringing it to my attention.
Saturday, January 24, 2015 8:03:00 PM

LizA. said…
I read her blog and fell in love with them when they first came out. Never even thought about using them for baby quilts--simply brilliant.
Saturday, January 24, 2015 9:28:00 PM

Mrs. Goodneedle said…
This block is precious and the hedgehog, equally so! I've been to the website and now am figuring that the blocks you're making are somewhere in the 6" range. I absolutely love them! Can't wait to see your fox flocks.
Sunday, January 25, 2015 8:22:00 AM

Denise in PA said…
I caved after seeing the quilt hanging at Sew Smart about four times. Can't wait to start making my foxes! And, the hedgehogs are calling my name too!!
Sunday, January 25, 2015 8:35:00 AM

Lcrrkhs said…
As another commenter posted, the glasses are darling. Go to Elizabeth's site and download that pattern. Then you can smarty foxes and hedgehogs!
Sunday, January 25, 2015 9:19:00 AM

Barbara Anne said…
How cute these blocks are and am glad you're having fun making the foxes.

Having had hedgehogs on our property, they're less alluring to me, but love the photos of glasses on both fox and hedgehog!

Gayle said…
I'm gonna have to check this pattern out - my daughter LOVES foxes - it would be fun to make this and give it to her for a surprise! Thanks for telling us about it
Sunday, January 25, 2015 5:50:00 PM