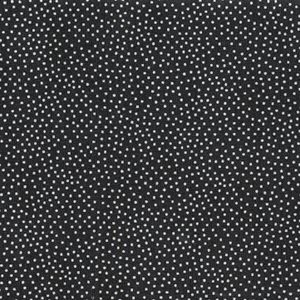 Well, I have all of those wonderful red/yellow/orange and black-on-white churn dash blocks that I received as Queen Bee back in November. And recently I figured out how I wanted to set them. Wonky. I'd picked up some white-on-black dots, three yards worth, I think, and had this stashed away with the blocks.

This morning the Renegades gathered for a sewing day. Wanting a fairly mindless project because I always get distracted by the gossip conversation, I decided that making the wide borders for these blocks would be just the thing. I made one as a test and then applied my 12-1/2" ruler on a wonky angle, and determined that 3-3/4" borders on the 9-1/2" blocks would work. So I cut a bunch of strips and began applying borders. All too soon it became apparent that I didn't have anywhere near enough fabric. The method I'm using produces a bit of waste, but Turbo will gather up those scraps and turn them into magic, so I'm not too worried about that.

When I came home I got to thinking about the old Yellow Pages commercials and ads that implored one to "Let your fingers do the walking!"  So I jotted down the selvedge info and then put Google and Pinterest to work for me. Rather than making a written list of sources and prices, I just Pinned any location that had what I needed for under $10/yard. Fabric.com had it for what seemed the lowest price until I got to a place in Indiana that listed my fabric for $8.25/yard. Hancocks is also in the running. On Monday, when the shops are likely to be open, I'll make my first phone call to Indiana and see if they have five yards; if not, Hancocks will be my place. So easy.

Quiltdivajulie said…
Just did the same type of specific searc for a certsin KF cobalt millefiore ... Glorious Color was the end destination ....
Sunday, January 11, 2015 8:02:00 AM

Barbara Anne said…
Count me in with LizA who uses the search at quiltshop.com as that lets you search over 400 quilt shops and see thumbnails of each fabric (if you click "thumbnails"). If you look thru every screen, there are often sale prices to be found there, too.

Good luck in finding the fabric in the amount you need. I look forward to seeing your wonky quilt in due time.