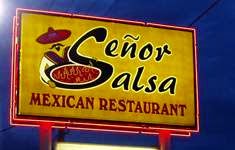 The rule at our house is that any time I work a twenty-four hour shift at the hospital, Himself either cooks our dinner or we go out. For months we've been tantalized by the "opening soon" promise of a Mexican place across the street from the hospital. Last night we paid it a visit. It was mobbed. Here is my experience; your mileage may vary.

Will we return? Probably not for dinner any time soon. Truth be told, once we were seated we felt just a wee bit hurried. And really cramped. The noise was too much for us old people; twenty-somethings on a Friday might find it perfect. It might be a place to have lunch with girlfriends; I'd be glad to give that a try.

Karla said…
I am so glad to read your review. I plan on going there sometime on a Monday(if they are open) or Tuesday night with a girlfriend. Now I am craving some good Mexican! Have you eaten at Vintage? Not bad food, albeit noisy.
Monday, January 26, 2015 7:22:00 AM

Mrs. Goodneedle said…
Your reveiew sound slike every Mexican restaurant I've ever eaten in; except for the one where you, Salem Stitcher and I dined in Asheville... Neo Cantina, still my fave! The company was superb that day too!! :)
Monday, January 26, 2015 8:03:00 AM

Barbara Anne said…
Ah, you've flung a craving on me.

My favorite Mexican restaurant was a long-gone Memphis one called El Chapo's where the dips and foods were delicious, well spiced, but not too hot; the interior space was roomy; and the parking lot was spacious. Sigh! I have the recipe for their wonderful cheese dip. Want it?

Denise in PA said…
Thanks much for the review! I've been wondering about that place. The new Mexican in Hatboro (Los Tacos Locos) is very good - nearer me than you, but I just thought I'd share
Monday, January 26, 2015 1:03:00 PM

Ms. Jan said…
Plates in Mexican restaurants are often hot because they sit in broilers to melt the cheese on the beans. Just sayin', in California
Saturday, January 31, 2015 1:17:00 AM