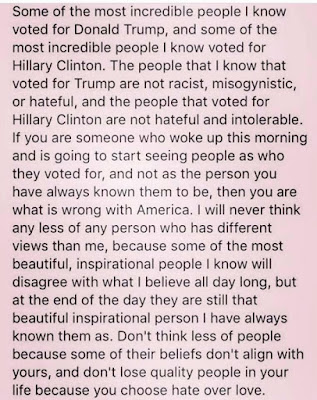 I really should print this photo out and put it on my wall in a prominent place. It's a reminder that I need, more and more, as our country struggles with the political forces that divide us.

Most of the people I know voted the way I did. A couple of friends didn't, and we deliberately avoid discussing politics.

One of my friends is a very, very witty, intelligent, funny woman who is a meticulous quilter and a superb cook. She's more generous than many people, and spiritual in an independent sort of way. These are qualities that I must not lose sight of because she happened to support Mr. Trump for President.

There are other, long-time friends who I imagine were in the Trump camp, at least initially. As I said, we don't talk about it. We are all still people who enjoy dinner together.

Sometimes, though, when I read things people post on Facebook, I get confused. A piece of me starts to see people as who they voted for rather than who I have always known them to be. And that's wrong. So I need this reminder.

And wouldn't you know that it came from someone I've known my entire life, a good and decent person who isn't racist, misogynistic, or hateful; a person who happens to have a political stance that is polar opposite of mine. And we are part of the same family! Thanks, cousin.

Helen said…
This blog post sure hits the nail on the head. I, too, am not a fan of our current president in any way, shape or form.

Some of our closest friends voted for this man. I am still amazed that close friends, friends with whom I felt our views were normally pretty much the same, voted for him and still support him.

Like you, I love these people. I'm disappointed that our views are not the same in this case, but my love for them remains. We just don't discuss politics.

I was having dinner with a close neighbor this summer on our deck. I know she and her son are on the same page as we are about politics. I mentioned that I was so shocked at some of our friends who supported DJT and her response was that she didn't know anyone who voted for him. I was surprised by that...I'm not sure why I was surprised, but it made me think.

Thanks for your post. Love reading your blog and following along with you.

AnnieO said…
Republicans held their noses but voted party line. I don’t think the Orange One has pleased many of them, but it hasn’t changed them as the persons they were, mostly. The rabid will remain rabid.
Wednesday, January 17, 2018 4:17:00 PM

Quiltdivajulie said…
Precisely why I finally decided to abandon Facebook. Many of my friends (and some of my out of state family) voted differently than I did - primarily because of one single issue. I understand WHY they did what they did but not that they were so blinded by that one issue they allowed that man to become our leader. Good graphic that you shared - all of us are more than the sum of our parts.
Wednesday, January 17, 2018 5:16:00 PM

stitchinpenny said…
I have been witness to a lot of elected officials and appointees. My opinion is that they all see their truth in their own way. The people that support them do the same. The other side sees things differently. I know for a fact that 3 very prominent politicians in my lifetime were felons and none of them prosecuted. There may have been more, but we forgive them all because they believe as we want them to believe. Others see things differently. These periods of turmoil have caused friends to turn against friends. We have survived and will continue to survive. We need to do what we can to make our country better by working at ground level to understand our friends and neighbors and to work toward goals we share.

Bridget said…
I work in an entitlement program so I have been especially careful to not exhibit any political opinions but I do see that the very people who will be most (negatively)impacted by the upcoming changes to the program are exactly the people who voted in the person who will eliminate the program they depend on. So? I only wish I would be able to forward the nasty vitriolic phone calls I will get on to the people who actually need to hear them. :) I am not on Facebook or any other social media other than sporadic visits to a couple generally inspirational quilting related sites. I don't have the time for all the rest.
Wednesday, January 17, 2018 5:26:00 PM

Synthia said…
Thank you, Nancy. I have a very dear friend I cannot talk with about politics or religion and haven't been able to for the 40 years I've known her. She loves to talk politics and her position is always right; no negotiations needed. Our friendship is important to me so I just let her spout off knowing that she knows I don't agree. It's worked for us for a long time. It does occur to me that perhaps she should run for office so she could fix the problems caused by the opposing party.
Thursday, January 18, 2018 8:31:00 AM

Cathi said…
I had a similar experience a couple of months ago. I made a comment on my cousin's facebook page that disagreed with his beliefs. OMG, him (age 60) and his two adult daughters tore into me with unrelentless vulgar name calling, wishing for me to die! This cousin has always been a little on the opinionated side. Needless to say I unfriended them and blocked them. I wondered what his mother would have thought. Now I tread lightly with everyone and keep my opinion to myself.
Sunday, January 21, 2018 9:07:00 AM