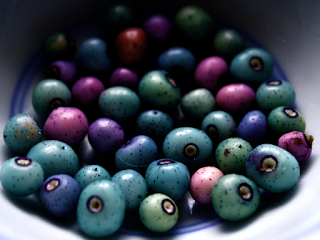 The past few months, since I returned from Spain, have been busy ones. First, of course, was the attempt to catch up with everything that had been neglected during travel: bills, laundry, house, dog. And the game. The game I'd found through Facebook not long before we'd left home. Three weeks away had made me very hungry to play.

Slowly (or perhaps not so slowly), the game edged its way into more and more of my time. Sewing time lessened. Blogging time became nearly nonexistent except for trying to write about the trip. Reading time took a back burner. The game was addictive.

Then, recently, some things happened that seemed to point out the obvious. It took a little while, though, for me to recognize the confluence that was happening. Somehow, these things all came together:


The picture at the top of this post is a bowl of porcelain berries. They are gorgeous. I've loved them for many years and even made a quilt based on their colors. They are also a weed. Their attraction is deadly to a garden.

The game is a life weed for me. It has consumed time that used to be spent thinking, writing, sewing, cooking, being.

This morning I pulled it out. Deleted it from my FB page. From my life. Funny how insidious these kinds of things can be. Porcelain berries. Life weeds.

Lori said…
So easy to get sucked into various things in life! I'm reading a book by John Piper called Life as a Vapor. It brings me back around to the important things in my life.
Monday, January 15, 2018 10:45:00 AM

Janet O. said…
I just recently started playing "words with friends", at the request of one of my sons. Can't believe how consuming it became. Now finishing up current games and not starting new ones. Life weed--love that term.
The berries are very pretty, as are many distractions and enticements.
Monday, January 15, 2018 10:55:00 AM

Shasta Matova said…
Those Facebook games are highly addictive and I've wasted a lot of time on them too. Definitely time for me to look at my list and prioritizing.
Monday, January 15, 2018 11:45:00 AM

howdidIgethere said…
I had a similar addiction a while ago to a game I played on my Kindle. Did not believe how hooked I was and how much time I spent playing or waiting to play or thinking about playing. Also did not believe how difficult it was to even THINK of stopping. One day I pulled together all my emotional strength and DELETED it. I know not everyone has such a difficult time, but I know better now. Congrats on breaking free!
Monday, January 15, 2018 1:22:00 PM

Carol- Beads and Birds said…
Good Post. I have some Life Weeds too. I seem to be constantly pulling weeds or looking for excuses not to. My purge has happened in layers. Each time I go through a closet, I find I can part with even more things. My purpose is not to cultivate more time for purposeful things, but to dispose of what is not needed so they will not be left for someone else to deal with when I leave this earth.

I look at email and blog posts early in the AM. Play my game while eating toast in the AM...then I am done with that stuff. When I am not putzing around the house or working in my "room" I am slow stitching. I traded one bad habit (game) for a great one. I can definitely do more weeding though.
xx, Carol
Tuesday, January 16, 2018 6:15:00 AM

Barbara Anne said…
Wonderful article and enlightening concept. Thanks for the link!

I have lots of room for improvement and life weeds to deal with. I wonder if the idea of weeding to have more time, energy, and creative thought will make the process easier to do? It will be easier to think about.

Anonymous said…
Your blog has really hit home today. I know that I've got some weeds to get rid of, so I can get on with my life. Thank you for sharing the article and your confession. I'm sure that a lot of people can learn from your experience. cindy
Tuesday, January 16, 2018 7:59:00 PM