A Letter to my Granddaughters 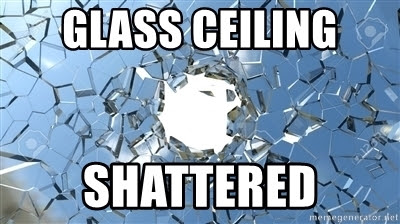 At nearly-thirteen and eight-and-a-half, you are both old enough to understand the history that was made this past week. A woman -- and not just any woman but a woman of Black and Indian heritage -- is now the Vice President Elect of our country.

Grandpop and I watched the news, the election returns, and when the outcome was clear we were both relieved and happy. But we weren't surprised. It was time.

Four years ago there was a lot of talk about the shattering of the "glass ceiling" when many of us anticipated that Hillary Clinton would become our President. Alas, that was not to be. Part of her concession speech included these words:  “And to all of the little girls who are watching this, never doubt that you are valuable and powerful and deserving of every chance and opportunity in the world to pursue and achieve your own dreams.” You were little girls then. Now you are big girls, soon to be women.

I mentioned that Grandpop and I were not surprised by the election of Kamala Harris. But this morning something happened that surprised both of us, and made it clear that even for Liberals like us, there is still growing to do.

Grandpop had ordered a load of fine stone for the patio that he is building out back. The telephone rang to say that the stone would be delivered at nine o'clock. And right on time, the dump track backed its way down our driveway and the driver got out to talk with Grandpop about exactly where the stone should be unloaded.

The driver had long, curly blonde hair, similar to yours, Caroline. She was a woman, perhaps thirty-five or forty years old. And she was driving a dump truck and expertly deposited a load of gravel precisely where it was supposed to be. I was so impressed; I could never have done what she did!

Isn't it interesting -- and odd -- that a female vice-president felt normal to us but a woman's delivering stone seemed very unusual? Now that I think more, it probably doesn't feel odd at all to either of you.

But it did to me, and made me want to remind you of Mrs. Clinton's words. If you want to become Vice President -- or President -- of the United States, go for it! Grandpop and I will be 100 percent behind you.

And if you want to drive a dump truck, we're cool with that, too. Seriously.

Barbara Anne said…
Brilliant words and attitudes that all little girls and big girls need to hear. We are the elderwomen who need to tell them if no one else does.

Bridget said…
thank you!!! I want my girls to soar in whatever field they enter, and not be held back from entering the fields of their dreams! They are 9 and think Kamala is fabulous!
Thursday, November 12, 2020 5:19:00 PM

Quiltdivajulie said…
This is just so fabulous - that you thought it AND took the time to write it down. Kudos to you and blessings to your grand girls!
Saturday, November 14, 2020 5:56:00 PM