On Sunday, all fourteen of us gathered for an afternoon together.

We had initially planned to meet at a state park just outside Annapolis; then Andrew and Amy offered their big back yard and sizable screened porch. And we said yes.

There was no hugging, no kissing, very limited food sharing, and we old folks tried very hard to stay six feet away from the others.

The kids hadn't seen each other in a long time, most of them since December. They've all grown a bunch since then. They were all so happy to be together. They painted seashells someone had brought. They played Murder In The Dark. They played soccer. They talked. They laughed.

Each family had brought their own lunch, but some people brought some things to share. At the end of the afternoon, just as it was getting dark, we sent out for a barbecue dinner and after that we went our separate ways. The Richmond people and the other Near Philadelphia people drove home. Himself and I opted to use our annual free night at the Holiday Inn and we confess to being in bed with the lights out at 9 p.m.

No turkey or pumpkin was sacrificed in the making of our day together. But it was Thanksgiving, nonetheless. 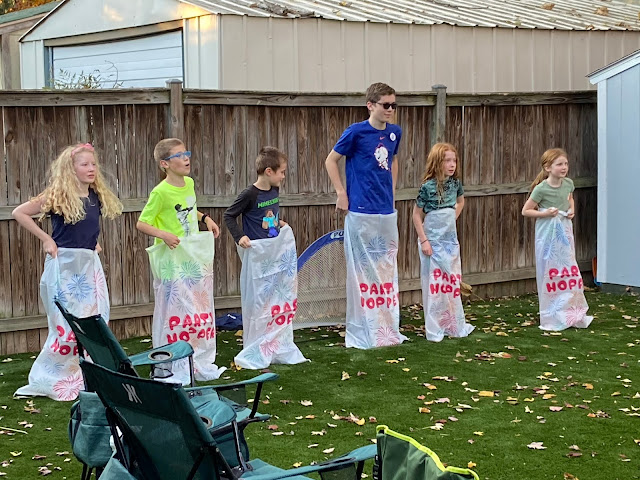 Quiltdivajulie said…
Family is precious - so glad you had this opportunity to be together while staying outdoors and relatively safe. They have indeed grown up A LOT.
Tuesday, November 10, 2020 10:21:00 AM

Barbara Anne said…
How sweet it is! So glad y'all and the family could get together in these crazy and worrisome times.

What a difference a week makes, though! Glory be that we're not on tether hooks as we were last week. Too late for a graceful exit, but somebody has to give His Awfulness the boot.

Janet O. said…
What a wonderful, responsible time you had with your family. Can't believe they are so grown, but I have only to think of my own grandchildren and I know it is true.
Saturday, November 14, 2020 4:20:00 PM