It's All About the Stuffing 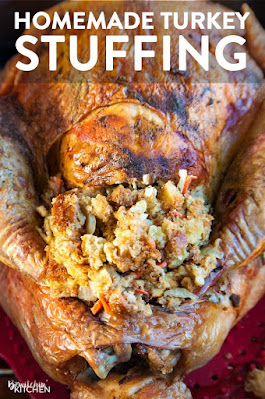 The other day I received an email that a fine local chef is offering complete turkey dinners for eight for $245. Never mind that this year there will be just three of us (me, Himself, and my dear sister). I am so fond of this man's cooking that I actually considered doing it. As I decided against it, I told myself it was because Paul was offering roasted butternut and leeks with rosemary rather than the Dottie's Cheddar Carrots that we love; again, the spinach soufflé instead of plain peas that my husband actually needs for Thanksgiving. But deep down I knew it was really about the stuffing.
We don't call it dressing. We don't call it filling. We call it stuffing and we are more picky about it than we are about our sacred chocolate chip cookies or our revered family spaghetti sauce.
When I was a child, there were two bowls of stuffing on the Thanksgiving table; one was pretty small and the other large. My father loathed onions, an ingredient everyone else found essential in stuffing. So the stuffing was made and before the onions were added, some of it was put into the neck end of the bird and then the onions were mixed in and the large cavity was filled. My father always would say, "Please pass the Good Stuff."
As an adult I figured out how to make stuffing like my mother made and that's what we [almost] always have had. One year I experimented with a glorious-sounding concoction involving apricots and Grand Marnier. It was nice, but I never did it again. I wasn't allowed.
When I worked at the school for autistic kids, one of the boys had a learning goal that involved taking a survey and analyzing the results. Daily he would come to the office with the day's question and there were always four choices. Last year on the day before Thanksgiving, the question was, "What is your favorite part of Thanksgiving dinner? Your choices are: turkey, stuffing, mashed potatoes, pumpkin pie." Max came to the people in the office one-by-one and every single person made the same choice.
We talk a lot about the turkey. Some of us speak fondly of the pumpkin pie. But, truly, when the survey is complete, it's all about the stuffing.
Email Post
Labels: Autism Family Food Life Experience

Anonymous said…
Aside from family,100% agree stuffing is the best part.
I've found a kindred spirit in your Dad,in that, he and I share the same dislike of the dreaded onion.

With only four at our Thanksgiving Feast this year, we will be thinking of our family and friends and share our love for them in thought and spirit.

Barbara Anne said…
I come from a family and married into a family that puts onions, celery, rosemary, tarragon, and salt inside the turkey (no "stuffing" and has cornbread dressing on the table made from the sacred family recipe that came from DH's great grandmother. My family used Pepperidge Farm's cornbread dressing mix so I "married up" in the dressing department!

For whatever reason, nobody in the family (Memphis, Richmond) stuffed our turkeys with stuffing. Go figure.

We'll have 3 around our table for Thanksgiving dinner this year and will talk with family here, in Florida, and in Memphis. As always, we're thankful for one and all - and also for everyone else, too.

Robby said…
In our family, it's dressing, not stuffing because it must have crunchy edges to go with the gravy. One year, my father's family gathered (we were close to 30 in all) and no fewer than THREE kinds of dressing were served because each of the ladies who brought theirs knew it was the best. I was small enough that my mother made me take a bit of all so as not to offend. We went home with leftovers of everything but dressing. Mom made THE REAL dressing to serve with the leftovers because young and old complained enough she felt compelled to rescue the holiday. Now, there was no complaining in the crowd at the 8 different pies that appeared, but that dressing certainly was the source of some tender feelings.
Saturday, November 14, 2020 3:35:00 PM

Karla said…
It is all about the stuffing, that is the stuffing of my face! LOL. But serious, it truly is. But I am open to try anyone’s stuffing if they are willing to pass their recipe on to me.. hint, hint Near Philadelphia, Barbara Ann and Robby. I too have a beloved who is “allergic” to onions. The “allergic” part is baloney, but that is a whole other story.
Wishing everyone a tender Thanksgiving.
Saturday, November 14, 2020 4:26:00 PM

Quiltdivajulie said…
in the household where I grew up it was called dressing and it in no way resembles anything I've had since then by any other name. Where we live now, stuffing must be cornbread (I still can't get used to it) and so on and so forth - I swear opinions on stuffing could cause families to split apart here.
Saturday, November 14, 2020 5:57:00 PM