A Day of Daughters 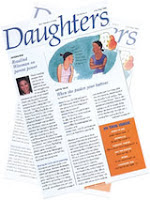 This morning while I was driving to work, I was thinking about Jean and her daughter Elizabeth. I'd received Jean's Christmas card yesterday and the accompanying note brought happy news.
. . . .
It was just a little later than noon when I received the email about another friend and her daughters. This one did not contain happy news.
. . . .
I knew, then, that today I needed to write about my friends and their daughters.
. . . .
I met Jean ten years ago when I was serving as a chaplain at a large inner city teaching hospital. It was my first day on the oncology floor and the last thing I wanted to do was to walk into the room that housed a 16-year-old girl, newly admitted. I'd expected the oncology floor to hold a much older population. But walk in, I did, and thus began a relationship that would be intense over the next eight months. Elizabeth had broken her arm in a car accident, and in the local emergency room in upstate Pennsylvania the x-rays had shown a bone tumor close to her shoulder. The tumor was malignant and would need to be removed. But first Elizabeth would need to undergo many rounds of in-hospital chemotherapy in an attempt to shrink the tumor before the surgery. In all likelihood, Elizabeth would lose her arm to cancer in an effort to preserve her life.
. . . .
By way of an odd coincidence, I was connected to this patient and her family. They came from a "town that nobody ever heard of" that was about three hours away from Philadelphia. The same town where my father-in-law lived. Elizabeth's parents were his veterinarians. They knew my father-in-law and they knew his Brittany spaniel and his spiteful cat even better.
. . . .
It turned out that Jean, then, became my patient rather than Elizabeth. Every few weeks when Elizabeth would be admitted for her chemo, I'd pick Jean up and we'd go to the cafeteria where she could share her fears, her worries, without Elizabeth's having to hear them. During this time usually the social worker would visit Elizabeth so that she, too, could share. Jean and I became close. On the day of the operation, I was with Jean and her husband when the surgeon came out to report to them. I stayed long enough to hear him say, "We were able to save her arm," and then I went back up to the oncology floor, happy to be the bearer of good news in a setting where there was precious little of that.
. . . .
Jean's Christmas card and note reported the Elizabeth has become a successful photographer, is engaged, and planning an August wedding. She has been cancer-free for ten years.
. . . .
As I drove to work, I thought about what it must have been like for Jean to fear the loss of her daughter's arm, to fear the loss of her daughter. I could not imagine.
. . . .
At 12:30 the email with the subject line "Sad News" showed up in my inbox. It was from a member of my little evening quilting group. My stomach tightened. Our member Kathleen has a lovely daughter who is losing her battle with breast cancer. She does not have a lot of time remaining. We have marveled at Kathleen's courage as she faces Laura's illness, as she talks about what is happening. We cannot imagine what it is like for her.
. . . .
The email was not about Kathleen. It was about another of our group, Connie, whose daughter Nancy experienced liver damage some years ago from a faulty tattoo experience, and is in hospital way out in Arizona. She has been waiting for a liver transplant and the situation has now become critical. Nancy must receive a donor liver within seven days. But the subject of the email was not Nancy. It was Connie's other daughter, Gwen, who this morning, quite unexpectedly, passed away down in Florida.
. . . .
I cannot imagine what Connie is going through. I simply cannot imagine. I do not even want to try.
. . . .
A day of daughters and thinking about them, and worrying about them. Rejoicing once again at the Eastering of Elizabeth's arm, and agonizing over the loss of Gwen and the urgency of Nancy's situation.
. . . .
I cannot imagine. All I know right now is that I wish I could be with Sherry or Amy or Anastasia tonight. I'd really like to see, to hug, one of my daughters.
Email Post
Labels: Chaplaincy Friendship

Susan said…
Although it could just as easily be sons, it makes me glad I didn't have the daughters I always wanted. I have to rejoice with you about Elizabeth and think that the two sisters will be in a better place. How hard to be their mother, however. I can't imagine, either, and I'm glad I can't.
Friday, December 15, 2006 1:00:00 AM

Mrs. Goodneedle said…
What a poignant post to begin the day reading, the reality of life's fragile nature. I will lift your friends up in prayer today, and I will hug my daughter extra tight when I see her tomorrow.
Friday, December 15, 2006 6:19:00 AM

Anonymous said…
You described perfectly the bouncing thoughts I experienced at your email. Yesterday I received good news from the doctor, so I made a special effort to hug my daughters last night -- for more than one reason!

Pam said…
What a thought provoking post. I have just one daughter and she is starting to make a life for herself many miles away, but we speak often on the phone. Thank you
Friday, December 15, 2006 6:50:00 PM