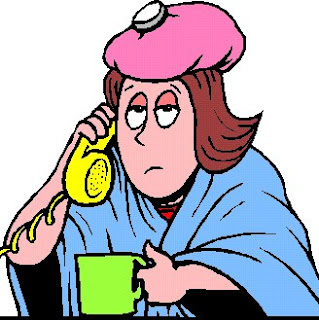 It started on the 22nd, actually. I was out to lunch at Whole Foods with Rhodo. We were sharing salads and the current details of our lives including our Christmas plans. We were both in excellent shape, we agreed, with the buying, the wrapping, the carding, the decorating all under control. Even the baking was right about where it should be. Just a few more projects. And then I felt it. The first chill, the first prickly feeling in the left nostril, the first tightening of the froat. "Oh, no," I thought. "The Christmas Crud."
. . . .
Were I to have been a physician, I'd have been a diagnostician of the finest type. By the time I got my groceries and returned to the kitchen to tackle what remained of the baking (the almond bars that Tom couldn't live without, the old-fashioned chocolate chips that Andrew absolutely had to have, etc.), the nose was running, the shivering was alternating with the overheating, and I knew I was in for it. The Christmas Crud.
. . . .
And so it was, and so it has been, and more than likely, so it will be for another week or so. When I get a winter head or chest cold, it always goes into bronchitis and hangs on and on and on. Next year, at the first twinge, readers, I'll post a quick notification and y'all can hurry to purchase stock in the Puffs corporation (I prefer the aloe treated variety and I don't care what the outside of the box looks like).
. . . . 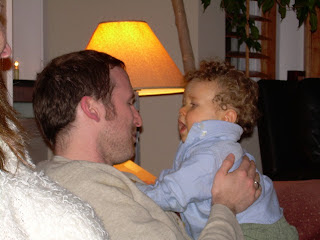 It came and it stayed. But it did not defeat. Christmas happened, with a few modifications to be sure, but with no less of its glory. One of the joys of adult children is that they pitch in and help. And one of the joys of married adult children is that they bring three more who also pitch in and help. They bought supplemental food including goodies that I would not have made. They set the table, they served, they cleaned up, and they sympathized. I spent much time ensconced in my big chair with my ottoman watching Sam crawling around with his swishy back end, listening to the big six banter, risking a coughing fit to laugh at their antics, and loving watching the aunties and uncles pass Samuel Eugene around.
. . . .
It was a wonderful Christmas that went on and on. The last of the guests did not leave until yesterday. I scrapped my plan to accompany Joe on a visit to his brother's place (a four-hour drive each way) in favor of staying home to continue to Deal With It. The temperature extremes are about over. Last night I actually slept. I still have a tissue box in every room, just to be safe, but they aren't being consumed quite as quickly. The pharmacist has recommended a new cough medicine that actually seems to be somewhat effective. I have a concoction of hot water, honey and lemon that I piece on. And in the evening I pour myself a big swig of Frank's Creme de Vie whose powers are miraculous: I still cough, but I don't mind nearly as much!
. . . .
Joe will be home tomorrow. Perhaps my voice will have returned by then. Perhaps not. I've got a stepladder up in the kitchen and when the spirit moves me, I'm rearranging some cupboards. The postal person brought a squishie containing the fixings for Chizuru's birthday block which was made within an hour of its arrival. A William Morris calendar miraculously appeared in my doorway from Marsha. Bonnie is coming over in a little while with a Netflix and a pot of her wonderful French onion soup. As Mrs. Goodneedle would proclaim, "Life is good." Even with the Christmas Crud.

Mrs. Goodneedle said…
Indeed, you know me well by now; you know what I'd say... I am so sorry that you are so deeply under the weather... prayers for returning health are being offered up in abundance.
Friday, December 29, 2006 9:23:00 PM

Susan said…
How nice to experience your family second hand, so to speak. Sam's swishy travels sound like fun! =) And so does having someone else clean up the mess!
Sunday, December 31, 2006 9:39:00 PM