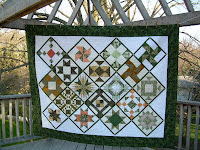 We moved to Near Philadelphia twenty-six years ago, and it was in that first year that I met Jaime's mom, Kathy. Kathy and seven or eight others make up the group of women called the Good Guys. When offspring of Good Guys marry, I make them quilts for their wedding gifts. Of course, as these kids grow up, they develop their own taste. Sometimes I know what kind of a quilt will be right; other times I have to check with their moms. I like to get the quilts done well before the time of the wedding. I thought I had Jaime's wedding gift finished a few months ago -- http://nancynearphiladelphia.blogspot.com/2006/09/great-william-morris-baskets-quilt.html -- but I was mistaken. That particular quilt needed to stay in my living room. So I was back to square one (in a manner of speaking) as far as a quilt for Jaime was concerned.
. . . . 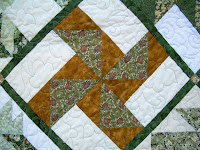 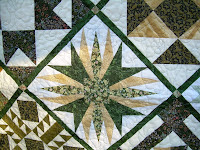 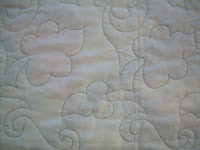 Jaime's a lovely girl. It has been fun watching her grow up. I only know one thing about Dennis, her intended, and that is that he is a lucky, lucky man to be marrying Jaime and into her family.
. . . .
Branky did the quilting for me. As usual, I told her that she would know better than I did what form that quilting should take. And I was right. She chose this absolutely perfect William Morris like vine and quilted it all over.
. . . .
Jaime and Dennis will be married in about six weeks. It will be a very special day indeed. Not only is it their wedding day but also my birthday!
Email Post
Labels: Quilts

Anonymous said…
Nancy,
This is a wonderful quilt. I love those William Morris fabrics.