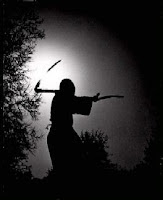 It's the contrast that keeps hitting me. Home alone today, recovering from a chest cold and trying so hard not to cough, I've spent more than the usual amount of time in front of the television, in front of CNN, to be specific.
. . . .
Earlier in the day the station was obsessed -- predictably -- with the hanging of Saddam Hussein, showing the masked men leading him to the gallows, fixing the noose, and then tastefully fading out, and fading back in to the body in the loose shroud. Over and over and over.
. . . .
By mid-day we were seeing images of the nation's preparations to pay tribute to Gerald Ford, the honor guard, the outlining of the ceremonies ahead, the loading of the casket onto the elegant Air Force jet.
. . . .
And I got to thinking -- though certainly not reaching any conclusions -- about the one man who is such a symbol of everything dreadful, a person so widely despised, the individual who somehow is the cause of our country's being at war with Iraq and the other man who is a symbol of everything decent, the person who was responsible for the healing of our country after a terrible, terrible time. And the fact that they are both being memorialized today.
. . . .
And I think that these images of two deaths couldn't be more opposed -- the dancing in the streets vs. the formality of the lying in state that is yet to come, the fineness of the casket vs. the sloppy white shroud, the people of the nation gathering to mourn vs. the tribe's coming to claim the body.
. . . .
Now it is mid-afternoon, and CNN is focused on the 8000 people clapping and dancing at the musical extravaganza purporting to be the funeral of James Brown, with Michael Jackson blowing kisses, and I have no idea how to fit that into the mix.
Email Post
Labels: Thinking

Deborah M. said…
Hi, I'm here from Quilting for Pleasure, just looking at the blogs. The strangeness of the three deaths was not lost on me; What a bizarre coincidence, the sacred and the profane.

Mrs. Goodneedle said…
Maybe it's not coincidence that the sharp contrast helps to provide the perspective.
Sunday, December 31, 2006 7:08:00 AM

Marla said…
Funny, this is something I'd been thinking about too. I just couldn't quite get it to words. Thanks for putting the words to my thoughts.
Sunday, December 31, 2006 10:59:00 AM

Shelina said…
I agree, it was strange to see the memorials of three such different people. So sorry about your illness, hope you get better soon.
Monday, January 01, 2007 7:57:00 PM