Near Christmas, Near Philadelphia 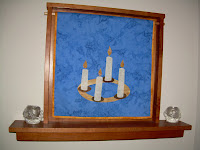 It looks as though Christmas is coming at our house. But first, there's Advent. When I was in graduate school at the seminary, one of my last classes was a liturgy class. My project for that class was to design a series of wall hangings for my home; each hanging reflects a different liturgical season. Joe made the frame and we have it hanging in our entrance hall. We change the hanging with each liturgical season. Most of them are made out of batik fabric because I thouht it to be reminiscent of stained glass. They are the appropriate liturgical colors and use symbols appropriate to the season. This one is for Advent.
. . . . 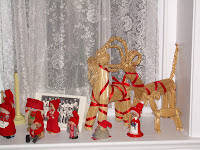 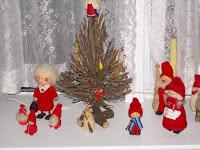 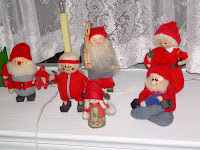 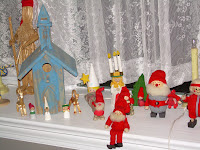 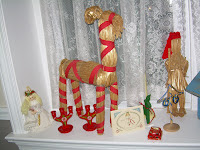 Our Swedish heritage is reflected in a collection of wonderful Swedish, Norwegian and Danish figures that we've collected over the years. Bonnie gave me the first one, and Carol has given me most of the others. Their church was made by Susan's late father-in-law. The photo in the background is the Thorsens, a wonderful tribe of Swedes that Carol belongs to and happily shares with Joe and me. Sherry likes to tease me, saying that if Joe and I ever do get to go to Sweden, we're going to be in for a huge shock when we discover that the people there do not all go around wearing little red sweaters and littler red hats.
. . . . 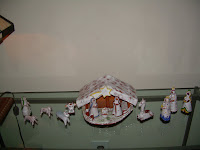 We have two nativity scenes. The first one is nearly 40 years old -- we bought it with money that Paul and Florence gave us for Christmas the first year we were married. We were living in Pensacola, Florida, and were delighted to find this at a little shop there. When the kids were much younger, they took great delight in placing the animals in compromising positions. I would not be a bit surprised to find that happen again this Christmas -- we have not put this nativity scene out for a few years and I imagine that the boys will be delighted to see it again and try to remember just what which animal was doing with which!
. . . . 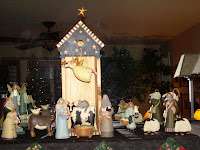 Susan gave me this nativity scene over a period of a few years. I just love it. The mantel scarf was a gift from Bonnie. We used to put the Swedes up on the mantel and the nativity someplace else, but last year I noticed that they were getting crowded, so they moved to the dining room window sill and this nativity scene moved to the mantel. The angels were mostly gifts from Bonnie. During the larger part of the year, when the nativity scene is packed away, the angels are on a shelf in our guest room where we have a couple of other choirs of angels to keep them company. The donkey was a recent acquisition. I'm on the look-out for a camel from this designer; then it will be complete.
. . . . 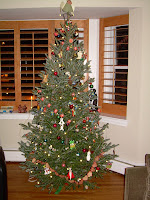 O Christmas tree, o Christmas tree . . . . I like a skinny sort of a tree. Last year's was just perfect. This one is pretty close! Tomorrow night I believe I'll move the packages down under it.
. . . .
In our family, one of the things we always consider when we go to look for a new home is where will the Christmas tree go? It is a silly sort of a question, to let something that is in effect for two or three weeks out of fifty-two to be a factor. But there you have it. And the funny thing is, we don't always put the tree in the same spot! We move it around from year to year. The year that Jack was a super frisky kitten, we just got a table-size tree. I'd rather have a regular sized skinny tree. The angel on the top was made by either Sherry or Andrew way back in nursery school.
. . . . 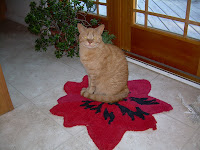 Vicki gave me this poinsettia rug a couple of weeks ago. Bodacious was a little bit afraid of it the first day, but quickly came to the conclusion that it was acquire strictly for his comfort and to show him off. Doesn't he look fetching?
. . . .
So, that is what our home Near Philadelphia looks like Near Christmas.
Email Post
Labels: History

Ms. Jan said…
Thanks for sharing your decorations Nancy. I love 'em! I giggled at your kids and the nativity animals. We have a set of wooden blocks that say "Merry Christmas" and our kids have long enjoyed mixing them up to say numerous rude things. It has become part of the holiday tradition here.
Monday, December 18, 2006 10:15:00 PM

Marla said…
would you contact me please. I have a question for you about your template. Hope you can answer.
Thanks. Morah2s@yahoo.com
Tuesday, December 19, 2006 2:13:00 AM

Paula, the quilter said…
Me dilemma this year has been to find a spot for the tree. Last January, we had a woodburning stove installed in my prime Christmas tree spot. Then CarGuy bought a very large TV the day after Thanksgiving and my other tree spot is gone. I ended up moving my plants in the entry and putting a very small tabletop tree on the plant stand.
Tuesday, December 19, 2006 3:24:00 PM

Mrs. Goodneedle said…
Your home is ready, are you? I love the photo of Bodacious looking so proud of himself on the rug, it does show him off beautifully; I think he knows that! Merry Chistmas, Nancy!
Wednesday, December 20, 2006 6:06:00 AM

Mrs. Goodneedle said…
PS... please show us the changing liturgical wallhangings as they make their appearances throughout the year; your Advent interpretation is wonderful, the batik is such a great choice.
Wednesday, December 20, 2006 6:34:00 AM

Pam said…
What a wonderful collections for Christmas. Thank you for sharing.

Bodacious has such pretty golden eyes. I bet no one has ever told him that before! LOL