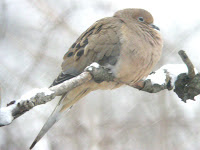 We had an influx of doves this morning. A dozen or more mourning doves appeared at the pan feeder on the deck rail; there were so many of them that they were bumping into each other and kicking the seeds out onto the deck. Some waited patiently on the rail; others couldn't wait and kept fluttering at the others until they could get a spot at the seeds. This preponderance of doves was unusual; we frequently will have one or two of them at one of the feeders, but I don't recall having a crowd like this before.

. . . .
Joe and I have always thought of doves as not exactly the brightest birds around. They appear to be very stupid, as though their tiny brains can't manage their big bodies. Sometimes they seem oblivious to the approach of a cat, bumbling out of the way at the last minute. Their clumsiness seems to be a trademark. This morning as we watched a botched landing, Joe remarked, "They look as though they don't know how they got there." I couldn't help but agree.
. . . .

But here's the weird thing. Last night at church the dove was a character in the sermon. The gist of the sermon was God in relationship to Noah, and by extension in relationship to us. Pr. G talked about Noah's sending out the dove three times before disembarking (just noticed that "ark" in the middle of the word -- how cool is that!). This morning, watching our feeder guests, I wondered at Noah's choice of a dove to send out. I'm pretty much amazed that the bird was able to find its way back to the ark the first two times, and am still not totally sure what happened the third time! What ever happened to the concept of the wise old owl? Noah sent out a dove? What was he thinking?
. . . .
And, of course, we see the dove at the baptism of Jesus, and later on in Christendom used everywhere as the symbol of the Holy Spirit.
. . . .
I know God is famous for turning things upside-down. And perhaps it is only the doves Near Philadelphia that seem to be so dumb. Maybe it is a case of appearances being deceiving and they are actually of at least average bird IQ. Or, finally, it could be that there are other types of doves that I've no experience with that make sense in the scripture stories. In any event, great fodder to chew on theologically. Will be interested to see what, if any, comments this generates.
Email Post
Labels: Thinking

LoieJ said…
Are doves the sheep of the bird world? Pretty but...pretty stupid?

You can watch the doves and gain some insite into the Biblical references that the rest of us don't have.

When I moved here, the neighbor (as country neighbors go) to the west had sheep. I didn't get to know their traits, but the pastor used many sheep images in his funeral sermon for this farmer. I'm sure that farmer understood the Biblical references better than the rest of us.
Thursday, March 08, 2007 10:03:00 AM

Mrs. Goodneedle said…
I wondered the same thing as PS, are we to draw parallels between the doves and the sheep? And, when the angel announced the birth of Christ... who did God choose the hear it first? The most educated? The aristocracy? No... the shepherds! The lowly, dirty shepherds... abiding in the fields, keeping watch over the flock. God's wisdom chooses the perfect vehicle every time! (OH, and for what it's worth... the doves in NC don't seem any smarter than those you describe near Philadelphia!) :)
Thursday, March 08, 2007 2:10:00 PM

Paula, the quilter said…
I just googled pigeons vs doves and came up with an interesting assortment. There is a dove called a Release Dove that rises up and circles and comes home. From my understanding, these are bred from white doves and homing pigeons. And then there is the translation thing going: in other languages dove=pigeon. Could Noah have release a homing pigeon?
Thursday, March 08, 2007 5:12:00 PM