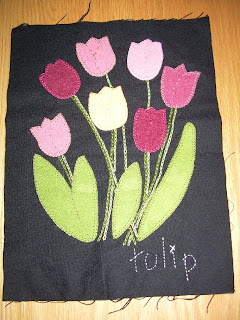 Joe and I are relatively new Netflix subscribers. We realized that we had never seen every single episode of "Upstairs, Downstairs," and those we had seen were so long ago that we had practically no recollections. So we're doing the series through Netflix. Finished the first season and are working on the second.
. . . .
Watching this series provides abundant time for hand stitching, and the latest of the "garden" series blocks is shown here. The tulips hold the promise of spring, which is a mighty important promise, considering what the weather is like Near Philadelphia these past couple of days. I'm presently working on the fourth block, "Chinese Lanterns," which is a favorite of mine because these plants grew in the yard of my childhood home and I thought, as a kid, that they were utterly amazing. I still do, but they don't grow in my yard any more.
. . . .
The snow that caused such uproar yesterday was still coming down when we went to bed last night. At some point it had turned to what they now call "wintery mix" which I think is the same stuff we used to call "freezing rain" but I'm not sure. Suffice it to say that the prolly six inches of snow that we got was topped off with a slick, crisp icy coating.
. . . .
I had a wedding shower to attend today. Joe started early this morning to dig out the driveway but it was a heavy snow that didn't respond well to the snow blower and he tired. Fortunately, Carol got her shorter driveway shoveled out and drove us to the shower.
. . . .
Tonight holds more of the Bellamys and the Chinese Lanterns. Plus some hot chocolate, I think, for the guy who is out there yet again dealing with the snow.
Email Post

Anonymous said…
There IS a reason I did not return to Ohio when I left the Air Force! Here is hoping for spring weather for you soon! Love the tulips!
Saturday, March 17, 2007 10:05:00 PM

Pam said…
Sorry to hear about the weather there. It just seems to be a never ending winter.

Mrs. Goodneedle said…
The tulips are a welcome sight in light of what was beyond your window. My dad said he would have to break through an ice layer to even think about using the snowblower but then decided to wait for the 50's and the thaw. I like the way he thinks. (He's north of Boston) I can't wait to see the Chinese Lanterns, either...
Monday, March 19, 2007 9:46:00 AM