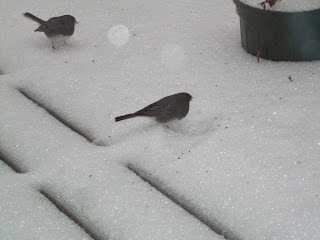 Today it finally happened, the long-dreaded Early Dismissal Day. We awoke to rain/sleet and by mid-morning it had turned to sleet/snow. The Upper School kids reached for their cell phones and soon chaos reigned as rumors started and built. I guess it was 10:45 when we got word that the first bus from an outlying district was coming to pick up kids. We checked the website of the two districts we try to pattern after and it was nearly one before they posted that they were dismissing at the regular time. By then, of course, many other districts had picked up students. The handful of students remaining after lunch were herded into the auditorium, where the Head of School had set up his keyboard; he and a student guitarist were on stage entertaining the troops. I really do not like to drive in snowy, icy weather, so I abandoned my post at 1:30 and stopped at the grocery store before coming home. Amy and Andrew were scheduled to come and spend the night and I wanted to make a wonderful breakfast for them.
. . . .
A yummy cherry coffee cake is finished. A vanilla cake is waiting to be iced. Ingredients for a southwestern quiche are at the ready. It's been fun.
. . . .
I took the above picture of some visitors to our deck a little while ago. They were oblivious to my presence, and also to Bo who was entranced by their closeness.
. . . .
Alas, the weather is going to get much worse before it gets better, and A&A will likely not embark on their trip tonight. It's nice to have the house smelling of good baked things and I'm sure Joe won't complain when he finds them!
Email Post

Ms. Jan said…
And here we are in California, enduring an unseasonable 80 degrees today. Sheesh, is there no balance?
All the food sounds good and it is fun to hang out and cook during the crummy weather. xoxoxox
Friday, March 16, 2007 8:11:00 PM

Pam said…
For goodness sake - this has certainly not been good weather this winter. I sure hope winter ends for you soon.

Enjoy your baking anyway. Hopefully summer will be wonderful and make this terrible winter just a bad memory.
Saturday, March 17, 2007 12:40:00 AM

Mrs. Goodneedle said…
The cherry coffee cake sounds wonderful... sorry for the change of plans w/ your family. I know how early dismissal can be such a headache for administrators.
Saturday, March 17, 2007 7:53:00 AM