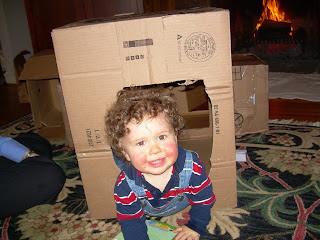 I'm home from work today with some kind of crud. It started late on Saturday and Sunday I was hoping it was just some kind of freaky allergy kind of thing. But Monday morning I knew better. Was miserable at work yesterday, sneezing and coughing and blowing, so today I'm home, trying so hard to nip it, whatever it is. When I get a common cold, it generally migrates to my lungs and usually goes into bronchitis, lasting at least three weeks. The one I had at Christmas time took six weeks to remit, so I'm kind of cranky to be starting up again already. Every once in a while, though, I'm able to get it under control so that it isn't any worse than what other people get.
. . . .
That's the bad news. Here's the good: Sunday we got to see 4/6 of our kids plus Sam! Amy and Andrew had been supposed to spend Friday night with us on their way to Brooklyn, but because of the snow, stayed that night home in D.C. and drove straight to Brooklyn on Saturday. I'd stocked up on goodies to make them a bountiful breakfast. So Sherry and Sam and Chris came to brunch after church and I fed them the strawberries with brown sugar and sour cream, the cherry coffee cake, and the southwestern omelet quiche. There was not much in the way of left-overs.
. . . .
Sam had a terrific time chasing Bo through the box-maze that Joe built. He calls the cat "Tick." It seems to be his third word, after Mamamamam and Dadadada. He can fold his hands at the table, can do "so big" and clap hands. All of this in just two weeks! His little cheeks are a bit chapped from teething drool/cold weather combination. But supposedly the first day of spring is this week (?).
. . . .
Just as they were thinking about heading home, the phone rang and it was A&A on their way down from Brooklyn and thought they'd stop for a quick visit. So S&S&C stayed and we all had a terrific hour and a half together. When kids live relatively far away, one takes what one can get!
Email Post

Mrs. Goodneedle said…
I hope you feel better very soon, I came down with something similar to what you've described the symptoms as being and... wonder of wonders... mine was gone in three or four days! Little Sam is so completely cute and adorable, I do envy you!!
Tuesday, March 20, 2007 1:16:00 PM

Patti said…
What a bummer to be sick again - sending lots of positive healing thoughts your way. Hope this visit of the crud is very short lived. Glad you got to see your kids! What a cute picture of your grandson! A head of curly hair just like my daughter's when she was that age.
Tuesday, March 20, 2007 9:12:00 PM

Susan said…
What a cute little guy Sam is. Your visit with everyone sounds wonderful.

I hope this crud doesn't hang around as long. Have you tried Airborne, or it's Walgreen's version, Wal-borne? I particularly like to use the grapefruit flavor from Walgreen's or the lime Airborne.
Tuesday, March 20, 2007 9:31:00 PM

Anonymous said…
I'm hoping you're feeling much better. Is the crud a good reason to kick back and read? I failed to note the last two books you were reading. Might you send them to me?
Sharon (the Lutheran, not the quilter)
Thursday, March 22, 2007 1:38:00 PM

Angela said…
Hope you are feeling better. Glad you got your babytime! Those kisses and huggies make everything in life better!
Saturday, March 31, 2007 2:22:00 PM