Second (or Third) Day of Spring 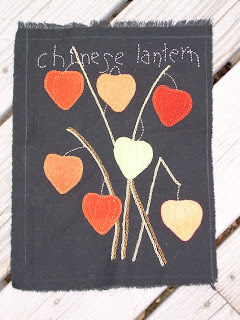 Depends on how old you are, I guess. As a child, I always understood the 21st of March to be the First Day of Spring. But lately it seems that the 20th is the designated observance. Whatever. Second or third, it is decent weather Near Philadelphia. The snow -- which has become grungy and ugly -- is melting and the yellowish grass appears. Just a couple of weeks, I hope, until we are proclaiming "For lo the winter is past! . . . . The flowers appear on the earth and the time of the singing of birds has come."
. . . .
About the only good thing to say about the congestive crud that has befallen me is that it provides ample time for handwork. The Chinese Lantern block is finished and the Maple one is nearly so. The Sleep Cure that I've espoused has done me no harm. I go to bed before ten at night and sleep until the alarm goes off at 6:30 and then take a nap in the afternoon. I'm certainly no worse, and quite possibly am already getting better.
. . . .
No matter. White Oak retreat is tomorrow, come hell, high water, or chest crud. Since we are not at full capacity, I've moved Dorothy out of my room so that if I cough during the night she won't be disturbed. And at the last minute, today, Honna is able to go, so she will be happy to room with Dorothy. And we've shaken up the driving arrangements since Marsha's and Honna's departure times weren't compatible. Flexibility; that's the key. So, reader, this time tomorrow Honna and I should be halfway to our magical destination, Featherweight and Bernina in the trunk, back seat full of fabric, Kingston Trio CDs in hand. Kathleen, godbless'er, has written that she is bringing along some "cough syrup" (her quotes, not mine) to ease my malady, and goes so far as to suggest I may need to share it with those who succumb to lint lined lung disease during the weekend. Not a problem, girlfriend! The belief that I just might have bested this ailment has filled me with elation to the point that I am thinking about Kathy Bates in "Fried Green Tomatoes" -- you remember, the TAWANDA scene?
Email Post

kdmade said…
I love the lanterns! I've been wanting to get my hands on the dried ones for ages now!

Anonymous said…
So glad you are feeling better! A trip to White Oak will do you so much good! Take sistah Jan and me along in spirit :-)

Mrs. Goodneedle said…
The Chinese Lanterns are very pretty. Enjoy every minute of your long-awaited retreat and be sure and limit yourself when it comes to the syrup!
Friday, March 23, 2007 6:06:00 AM

Anonymous said…
How wonderful, to go on a retreat, fabrics, needles, & friend in hand! Have a ball & get better soon!

Susan said…
I hope you are having a marvelous time. I haven't been on a quilt retreat since last summer. It's about time to go.

Jenni said…
I love the scene where she gets her car space stolen by 2 young women, who tell her something along the lines that they are younger and more beautiful than her. She responds by crashing into their car and says "I'm older and have better insurance than you".
Monday, April 02, 2007 5:45:00 PM