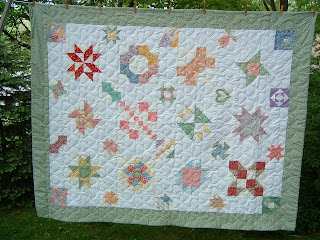 No, that's not a typo in the title. When we first moved to Near Philadelphia, the drive-up window of the bank had a hand-lettered sign that said "No Withdrawls." I immediately knew that "withdrawl" was Southern for "withdrawal," and the difference was the speed at which the withdrawing occurred. I giggled to myself about that every time I went to the window. Alas, the sign is gone, so apparently withdrawls are now permitted.
. . . .
So, anyway, I'm going through a bit of withdrawal this week. I need to sew a little every day. Either by machine or by hand. It's pretty much how I keep body and soul together, in a manner of speaking. Last night in front of a new TV show, I did hand stitching on the current "Time Began in a Garden" block, the tulips. I was hoping to have it ready to post to the blog this week. Alas, starting tonight, I have to be out each night for three consecutive nights. I don't like weeks like this. I'd prefer to be out not more than two nights out of five. But sometimes it happens. And it is all good stuff. But it means sewing withdrawal.
. . . .
The quilt pictured has nothing to do with withdrawal or withdrawl. But I wanted to include a picture! It was made as a gift for a young woman from church who moved to New York City to live on her own. A brilliant writer and editor, Emily had done her time in Philadelphia and was ready. We were serving together on a church committee when she was in her job and apartment search and she confided, "I hope I earn enough that I can afford to heat the apartment!" Just in case she couldn't, I made her a quilt from a 30s repro block swap. It's been a couple of years now, and from what I hear, paying for the heat has not been an issue.
Email Post
Labels: Quilts

Wendy said…
What a thoughtful thing in to coordinate a block swap for Emily.
I know what you mean by withdrawal, I don't like to be out too many nights in a week.
Tuesday, March 13, 2007 5:34:00 PM

keryn said…
What a lovely quilt, and a lovely thought behind it. I've always thought being a starving writer in the big city was not a glamourous occupation; glad your friend has escaped that fate.

Like you, I need to sew to keep my balance; I think more kindly of the world after I've sewn a few blocks together.

Mrs. Goodneedle said…
My week was like yours last week. Groan. We can agree on being overextended and away from needles and thread for too long, I'm the same way, I get a little cranky without them! Your 30's quilt gift is lovely, she may have heat to warm her body in NYC, but your gift of friendship warms heart and soul for a lifetime.
Tuesday, March 13, 2007 6:45:00 PM