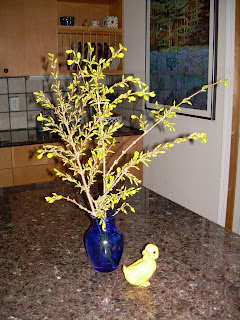 Here Near Philadelphia, Spring takes its own sweet time coming. I've noticed all over blogland that people are posting pictures of the first daffodils as though it is obligatory to do so. We've got a couple of crocus up, and the daffs are starting to open. But my harbinger of spring picture is of a forsythia branch that Joe brought in the other day. He likes to do this early in the spring, cut that first branch of forsythia and bring it inside to force it to open. You can see that it as begun to do so.
. . . .
I'd always liked forsythia, but became inordinately fond of it one of the years that Andrew was in nursery school. He came home one day bearing a piece of original art. The teacher had had the kids take a large piece of manilla paper and draw a long brown line on it. Then small pieces of cut and pinched up yellow tissue paper had been glued along the line on both sides. "It's FORTHYSIA!" he told me proudly. And hence it has been known in our household evermore. I do like to see the crocus and the snowdrops peer up through the frozen ground. And I'm always happy to see those daffodils, of which we have plenty. But when the FORTHYSIA comes along, then I really believe we'll have a spring.
. . . . 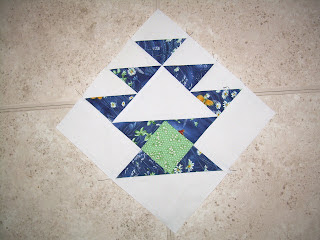 My second spring picture is Sharon's lotto block. An on-line quilting group I belong to is running a lotto this year. It isn't really a typical lotto. Instead, each participant is assigned a month and she sends out a FQ or a F8 of her chosen fabric to all of the other participants, along with instructions on what she would like done with the fabric. We make the block desired and send it back. Voila: Instant quilt! In a manner of speaking.
. . . .
It's a fun thing to do. We stretch ourselves as we work with fabrics that we wouldn't ordinarily choose. Such is the case for me this month with Sharon's fabric. It's pretty enough, but I don't think I'd ever have chosen it. Sharon, however, is amazingly imaginative and creative, and I'll be eager to see her finished quilt. She asked us to use a white background and a mint green accent. I'd been wanting to make this particular basket block for quite some time, and Sharon's fabric seemed a likely candidate. The thing is, you know, with basket blocks, the directions usually yield two rather than one. Do you think Sharon will mind getting two blocks? I don't.
. . . .
It is my turn to send my fabric out. I chose an intense black on black print that I found in Lancaster County last weekend. I'm asking people to use it for the background of the block and use two different batiks to make me an Amish Star block -- you can see it here: http://www.quilterscache.com/A/AmishStarBlock.html -- I think they will be just drop-dead gorgeous.
Email Post

Tanya said…
Thank you for visiting and commenting. I've read through your March archives too and I've put you on my favorites list so I can visit daily. Does your DIL look anything like me? (I'm half too!) Actually I prefer to refer to my heritage as "double"! Japanese and American! I've got double the culture, double the fun!
Friday, March 30, 2007 12:13:00 AM

Mrs. Goodneedle said…
Do you know about white FORTHYSIA? I had glimpsed some blooming alongside the typical yellow variety and it was spectacular. I wasn't sure what it was but it looked EXACTLY like forsythia, except for the color. A little web-research and some consultation with a friend whose daughter is an archival gardener supplied me with the answer... yes, it's white and it's FORTHYSIA! ;) Oh, your Amish Star will yield incredible results!
Friday, March 30, 2007 8:14:00 AM

Shelina said…
I have my obligatory daffodil flower on my blog, only because nothing else is blooming right now, except a couple of things that are so low to the ground that they aren't pretty. I do have forsythia now, and if I cut them up and put them inside, they could look pretty. They cover my trash can outside so they aren't the most photogenic things ouside.
Monday, April 02, 2007 2:42:00 PM

Susan said…
Speaking of batik and black star blocks, I just blogged the quilt I made where I included the two you sent with some Amish fabric/black that Moira made. Looks pretty good. Just in case you thought I forgot them. =)
Tuesday, April 03, 2007 7:00:00 PM