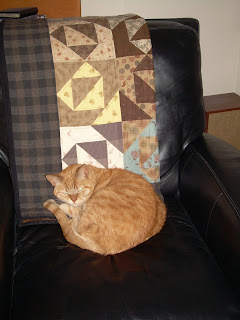 Bo isn't the most affectionate cat we've ever had, nor the most sociable. He's even more aloof than other cats who have lived here. And he's not well named at all. He's the spookiest guy, terrified at the slightest sudden sound. We adopted him from the vet's office when he was about four months old; he'd been brought in with his brother by someone who had discovered the two of them living on the streets, and far too young for such a lifestyle.

This winter, for the first time in the years we've had him, he's begun climbing into my lap once in a while. He doesn't stay long, but it's kind of nice.

Tonight I found him curled up in Joe's chair, against Joe's quilt, and thought he looked mighty sweet. So I took his picture. And here it is.

Unknown said…
My Henry looks just like Bo and unlike Bo is the most affectionate cat I have ever had. He is my constant companion. On another note, I was also addicted to tetris several years ago. You might like to try jigsuduko. It is my new fun computer game
Tuesday, March 17, 2009 11:06:00 AM

SallyB said…
Awwwwww! I so miss having a cat to cuddle! My brother's cat Dupree is the most anti-social beast. He doesn't even like it when I speak to him when I'm over at my mom's house visiting. The tail starts flapping and he shoots me this look of supreme irritation if I even try to carry on a conversation with him! And if I pet him......geez, you'd think I'd just thrown water at him!

Bo looks like my kind of cat! Just wish I lived someplace that allowed pets.....