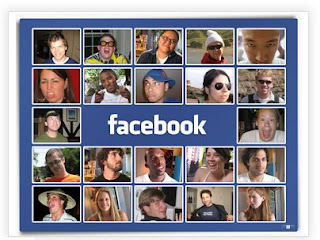 I've been on Facebook for six weeks now. I wasn't certain about it when I started, if you remember. I've checked in with the site a few times each week, but haven't done much more than that with it. I've pretty much decided not to have anything more to do with it.

It's all about TMI! Too Much Information! I don't need to know that FL is about to take a bath. I don't want to know that RT called in sick at work when she wasn't. These are some of the things on "walls."

One "friend" sends me things on a daily basis: virtual candies, religious tokens, holiday observance paraphernalia. This is a woman I barely knew when I was acquainted with her and I haven't seen her in five years. And I'm not the only one she's gifting -- the home page shows me that she's sending all kinds of things to all kinds of people! She's employed full-time in a stressful job, has a workaholic husband, and three little kids. What the heck is going on with her? (rhetorical question)

Then there are the memes. I've pretty much avoided memes in the blog world. They are rampant on Facebook and I've totally avoided them there. I don't want to answer twenty or more questions about my first pregnancy -- was it planned? Did I get the gender I wanted? Holy cow. Is nothing too private to ask? To share? With 81 close"friends"? What happens to a girl who reads her mother's meme and finds out that not only was she an accident, but mom really wanted a boy? There are all kinds of these memes. I took a look at one I was asked to do -- I don't care how many pillows LF has on her bed. I don't want to think about why she has so many, either! I feel like a voyeur!

There are folks who do not seem to realize that once they are "friends" with someone, that person sees everything that they write in their "status." And that some of it is inappropriate for different audiences! The home page today showed me that a young man from my church said something terribly offensive about a fellow with Down syndrome. I didn't need or want to know that he'd said that.

In the interest of keeping irreversible decisions to a minimum, I'm not going to close down the account. Someday I might find a good reason to want to use it. But as for now, I'm going to go weed out my "friends" and delete those who really aren't. And then leave it all alone and get back to sewing!

Oh, and PS: Don't even talk to me about Twitter!

JennyBHammond said…
I agree with the TMI...especially since FB has updated to a new format. It's even more revealing than before.

But I still like it because it gives me small insights into people's lives whom I lost touch with (after returning from overseas:-)

Using your Friend Lists and Privacy Settings will help you sort out what you WANT to share and what's being shared for you:-)

Lorraine said…
I agree Nancy....and I have seen some posts lately on Twitter - I have come to the conclusion that Twitter is something I don't need in my life....I think the name says it all!
Wednesday, March 18, 2009 7:20:00 PM

Barb said…
Ahhhhhh yeah, now I know the decision I made weeks ago is absolutely the right decision ~ I will just be a blogger! Thanks Nancy, well said by you!
Wednesday, March 18, 2009 7:30:00 PM

Paula, the quilter said…
You have just stated what I feel. I do not have either account and probably won't. I stick with blogging.
Wednesday, March 18, 2009 8:32:00 PM

Pati said…
I agree with you about FB! I'm currently at odds with my sister who has posted a picture of me that I DON'T want on FB, but she refuses to take it down because it is her FB page and she likes the picture. Oh well, what can one do?
Wednesday, March 18, 2009 9:31:00 PM

Tanya said…
I'm afraid I don't really know what the difference is between blogging and facebook. I mean a lot of us put stuff on our blogs that maybe people don't really need to know but we don't mind saying... Memes are on blogs. Whether I participate or not I chose. And because e-mail is open I get some e-mails from people who think they really know me.. but I don't know them. And of course I have not idea what a Twitter is. Don't bother to find out right?
Wednesday, March 18, 2009 10:15:00 PM

Clare said…
There are a few of us quilters on there. Not much communication goes on but we do have fun playing some of the word games. You might like to join us?

LoieJ said…
There are some settings of FB that can be changed. They haven't been obvious to find, however. The new look of FB helps one decide who gets to see the comments, that should help, assuming people use it.

I don't understand why people discuss things like their wedding plans on FB instead of on direct emails and phone calls. That is going on in my family circle.

Gretchen said…
You have confirmed to me that I do not want to join Facebook. Thank you! I am going to stick with my blog--that's enough and I get a lot of enjoyment from it. Besides blogs are usually about whole, thought-out thoughts not "now I'm making meatloaf for dinner. Now I'm taking out the trash" (does that make sense?) I think there comes a point when people need to ask themselves--are they spending too much time with "friends" on Facebook, Twitter, et. al. when they should be spending time with real family and friends???
Thursday, March 19, 2009 1:07:00 PM

Guenveur in Kent said…
Where on earth did you get such bizarre "friends?" I haven't seen anything like that on my Facebook page. I only have friends whom I personally know. THe thing I like about it is having gotten in touch with some of those great kids from the early days of THII. I don't blame you for being disgusted with this whole letit all hang out thing. Do you remember Augie White; that's the sort of thing he did,like wanting to show everyone the video tape of his wife giving birth. Ugh!He thought it was so hip.Reality TV shows are the end result of that 70s thing about being "honest" and "open." They shoudl shut up already.
Thursday, March 19, 2009 2:02:00 PM

SallyB said…
OIK, I'm wa-a-a-a--ay behind the curveball on pop culture stuff, so....what in the world is "Twitter"? Doonesbury did a recent strip on that and I kinda didn't get it because I'm not up on all this recent techno stuff. Is it some kind of "stream of conciousness" texting or something?